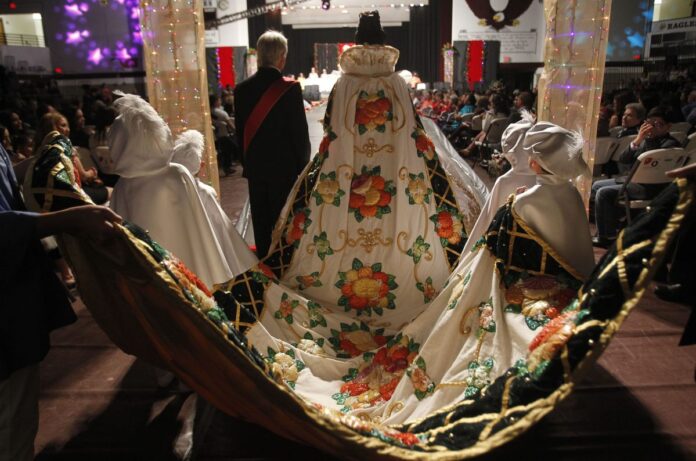 MISSION — From learning an entire industry’s history to being judged by your appearance as you wear a large ball gown, the road to becoming Queen Citriana is a difficult one. Many young women throughout the Rio Grande Valley compete for the title, each for their own reasons.

For Madeline Madden, her motivation was to honor her grandfather after he died last April. “My grandpa was very involved with the citrus industry,” she said. “He wasn’t a grower, but he did have some orchards in his back yard.”

“My dad always wanted her to do it,” said Madden’s mother, Monica Martinez-Arriaga. “He loved the citrus industry and so he just bought this orchard, a little ranch, 30 acres, and he just adored it.”

Madden and 21 other young women vied for the title of Queen Citriana of the 80th annual Texas Citrus Fiesta, each girl already a duchess chosen to represent a city or area.

Madden represented the Sharyland area as the Duchess of Marsh White.

Madden was required to go through an interview process to earn the duchess title after which she and two other girls were selected to represent the area.

“I’m really excited, I think this a wonderful opportunity. It’s a huge part of history, especially down here in the Valley. Just being able to have this chance, it’s a huge honor,” Madden said.

Madden, however, just barely made the age requirement to participate. Contestants have to be 16 years of age by Jan. 31 and she turned 16 on Wednesday, meeting the deadline by only six days.

Within a week of obtaining her duchess title, Madden said she had gotten in contact with someone to make her gown, choosing to entrust Delfina’s Custom Design in Mission with her dress.

Delfina Rios, who was at the coronation ceremony Thursday night, said she has been making dresses of almost 30 years.

“The truth is I feel like this is a gift from God,” she said in Spanish. “I began dreaming and the Lord sent someone; it was the first one I made, a Ruby Red (dress).”

This year Rios made seven of the duchess’s dresses, which she began working on in October and finished about a week before the royal reception, held the Saturday before the coronation ceremony.

However, her work doesn’t stop there. She also attends the events to help the girls get into the dresses and address any issues that may arise throughout the evening.

Rios said her dresses usually run between $1,500 and $5,000 depending on the materials and the fabric.

“But of course some girls didn’t make a dress, which is completely fine, they bought a dress and they put their fruit on it,” Madden said.

There are many requirements the dress must meet including, color scheme how long it must be, how high the neckline must be, the length of the gloves and the color of the shoes.

Because she was the Duchess of Marsh White, Madden’s dress was yellow; however getting the matching shoes was tricky.

“They don’t sell a lot of shoes in that color or there aren’t a lot of places that still buy shoes like that so you have to start getting really creative,” Martinez-Arriaga, her mother said.

The girls get to wear the dresses on three occasions: the royal reception, coronation night, and the Parade of Oranges, which was held on Saturday.

Afterwards, the dresses can be donated to be displayed at the Mission Historical Museum.

But the competition is more than an opportunity to wear an elegant dress. Sixty percent of their total score is based on an interview conducted the day before the coronation.

Five judges interview the duchesses, who were asked about the history of the citrus industry and about themselves, including extra-curricular activities and aspirations.

Madden teaches CCD at her church and volunteers at the Boys and Girls Club of Mission. She’s also on the Sharyland Pioneer Varsity tennis team, is a brown belt in the martial art of krav maga. All that is taken into account during the interview, but the coronation night is a different matter.

“The judges, of course, look for poise on stage; are you smiling, do you look like you want to be there, are you having fun, do you look excited, that’s what they judge, really.”

Bryceidee Leos was apparently able to meet all those expectations last year as the Duchess of Ruby Red Grapefruit because she was named Queen Citriana during the 79 th annual coronation ceremony.

Though announced as queen last year, Leos wasn’t crowned until this year’s coronation ceremony. The Parade of Oranges on Saturday will be her first official event as the queen.

“For (little girls) to look up to me, I think, is one of the biggest roles of being Queen Citriana,” Leos said. “Also representing the Texas Citrus Fiesta, it’s been going on for many years.”

During her coronation ceremony, Sarah Forthuber, Duchess of Rio Red Grapefruit, was named Queen Citriana for 2018.

Though Madden didn’t win the title, she said the role of duchess is fulfilling.

“This is a huge honor,” she said. “The history you will be a part of, it’s incredible.”