A tropical storm warning has been issued for the Rio Grande Valley as Tropical Storm Nicholas arrives around dawn Monday, with the worst of the high winds and heavy rains continuing through the afternoon.

National Weather Service forecasters in Brownsville said the storm was compact and that coastal areas would be hardest hit with 35 to 40 mph winds and up to four to six inches of rain.

The storm is expected to move quickly through the region, and forecasters said Sunday there is no indication Nicholas will intensify into a hurricane, although it remains a possibility.

The forecast is for Nicholas to continue hugging the Texas coast and proceeding north through the rest of the week as a tropical storm.

“The exact location of the center will determine the extent of impact on land,” Barry Goldsmith, a meteorologist with the NWs in Brownsville, said Sunday afternoon. “So here’s the deal. A center remaining offshore would sharply reduce rainfall amounts from coast to inland locations with limited impact to the Mid to Upper Valley, if any rain falls there at all.”

“But a center moving just inland, say along or just east of interstate highway 69E, would create significant impacts from Cameron to Kenedy County, but much less across the Upper Valley,” he added.

The main threat from Nicholas will be flooding rain and the forecast is for 35 mph to 40 mph wind gusts east of I-69E. But Goldsmith warned of the possibility of higher wind gusts in some areas.

“There’s a reasonable worst-case scenario for 40 mph wind gusts and stronger rain bands in Hidalgo County east of I-69C, that’s the McAllen, Pharr, Edinburg area,” Goldsmith said. “But 50 to 60 mph gusts in stronger bands in Cameron County and Willacy County along and east of I-69E, and if that does happen, you can expect minor damage…”

The forecast for rainfall totals is four to six inches in coastal Cameron and Willacy counties, and three to four inches in Brownsville. Two to three inches in Harlingen and Raymondville and one to 1.5 inches in McAllen are forecast.

On Sunday afternoon, coast-hugging Nicholas was off the Mexico coast and moving north-northwest at 13 mph. Its center will be near or over South Padre Island Monday afternoon.

The tropical storm warning is from the mouth of the Rio Grande north to Port Aransas, and a storm surge warning has been issued for Cameron, Willacy and Kenedy counties.

Goldsmith said the worst of the storm surge along the coast at South Padre Island should arrive at or near low tide around 2.30 p.m. Monday, minimizing the impact of high water on the Island.

The City of Harlingen’s pre-filled sandbag distribution commences at 7 a.m. Monday at the public works facility at 404 South 54th St. Distribution will continue until 6 p.m. Proof of residency is required.

The City of San Benito also announced sandbags would be available Monday from 8 a.m. to 1 p.m. at the City Service Center. Proof of residency is required.

The next week to 10 days should be active in the Atlantic basin with three disturbances with the potential to evolve into tropical systems now being monitored off the west coast of Africa.

Forecasters say it is far too early to determine where these might track or even whether they will develop into more robust tropical systems. 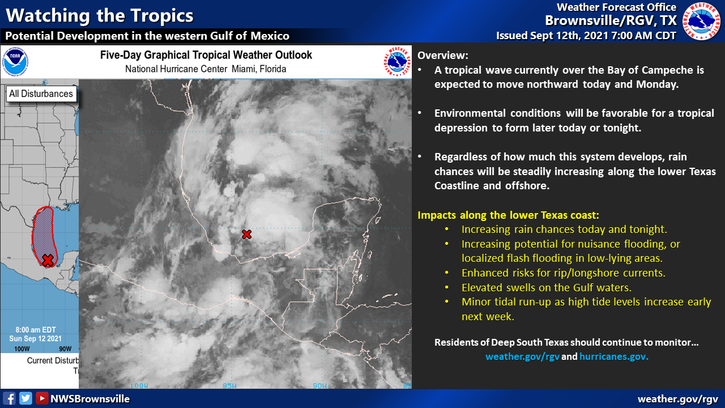