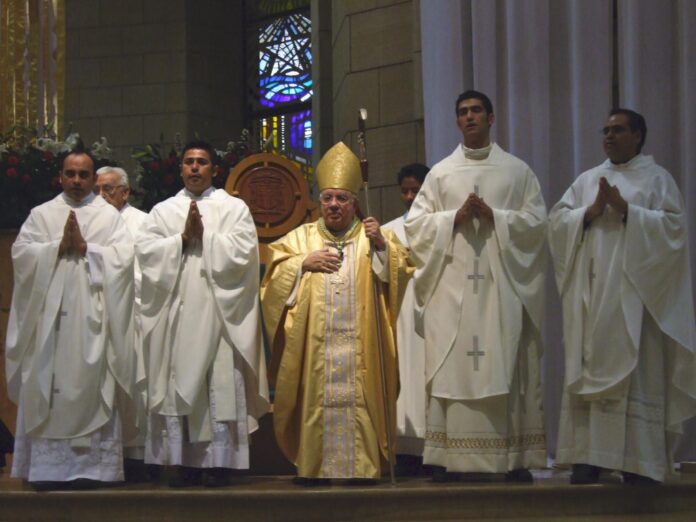 The Most Rev. Raymundo J. Peña, who died Friday at age 87, leaves behind a complex legacy that documents a tenure that was active and decisive. His stewardship of the Catholic Diocese of Brownsville surely will include the rapid growth and expansion of the diocese, and the outreach and recruitment for vocations that crossed well beyond our borders.

Peña was a pleasant and outgoing bishop who encouraged civic engagement and activism; during his tenure groups such as Valley Interfaith grew in both size and influence.

Sometimes that activism even turned back upon the bishop.

A bold administrator, Peña increased the diocese’s share of Sunday donations from each member church, a move that drew widespread complaints. He used that money, however, to fund unprecedented growth, creating new parishes across the Rio Grande Valley and funding renovations and expansion to many existing churches.

He began rotating parish priests every few years, angering many parishioners who had grown to know and love their pastors. Peña said that was his point — he wanted to ensure that the faithful always remained devoted to Jesus Christ, rather than their pastors.

Under Peña’s watch, the Basilica of Our Lady of San Juan del Valle became a major global pilgrimage and tourist attraction. The bishop supported its development, assigning some of the diocese’s most popular priests to the parish. Peña petitioned the Vatican to move the diocese’s offices to the basilica from the small, pre-Civil War Immaculate Conception Cathedral in Brownsville, although the request was denied.

The bishop actively recruited men for the priesthood locally, on both sides of the border. Many of the current Catholic clergy with Valley roots are the result of his work.

Small of stature but strong of will, Peña oversaw the diocese during some of its — and the Catholic Church’s — most difficult times. He defied calls for information regarding any Valley priests who were accused of inappropriate conduct, citing the church’s confidentiality mandates. He also was accused of having but refusing to release information in the investigation of a Valley priest who was suspected of murdering a McAllen schoolteacher in 1960.

Another contentious issue was the diocese’s ownership of the local Public Broadcasting System radio and television stations; some people argued that the partially tax-funded enterprises violated the constitutional ideal separating church and state. The criticism was loudest after the television station pre-empted a PBS program regarding the priest molestation scandal.

The diocese divested itself of the stations in 2018 under Peña’s successor, the Most Rev. Daniel E. Flores.

A rosary for Peña will be said at 7 p.m. Tuesday at the cathedral. Public viewing all day Wednesday and a 10 a.m. funeral Mass Thursday are scheduled at the basilica. The services will be livestreamed on the diocese’s YouTube channel.

Memories of Bishop Peña could be as complex as the man and the times in which he served. His most lasting legacy, however, surely will be a diocese that grew larger, and stronger, through his work.