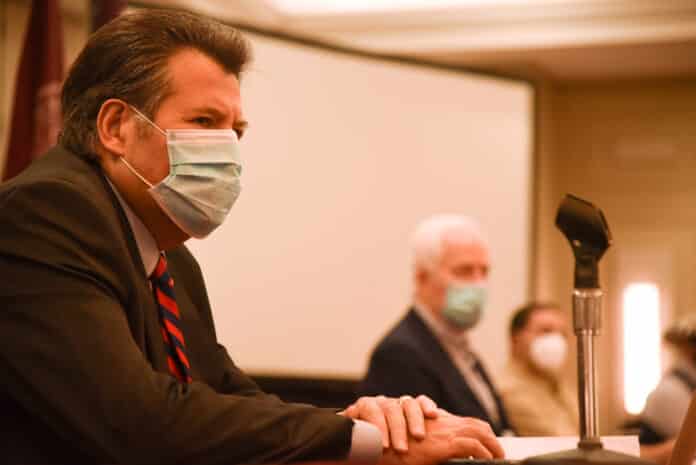 The city of Laredo will receive a 10-day reprieve of migrant transfers from the Rio Grande Valley and Del Rio, according to city and county officials.

“They’re going to honor my declaration. They understand my situation, like everybody else. They actually appreciate it. They were very cordial,” the county judge said.

Webb County’s declaration follows the city of Laredo’s lawsuit filed Friday against the Department of Homeland Security urging a federal court to grant a temporary restraining order to keep migrants from arriving to Laredo from other Border Patrol sectors.

The lawsuit is still ongoing. No hearing had been set as of Wednesday evening, but Laredo Mayor Pete Saenz said the city was prepared to present its case Monday.

“But by that point, the U.S. attorneys representing the federal government asked that we enter into negotiations, and they promised us that they would stop the buses for a period of time,” Saenz said.

The following day, the Webb County judge signed a disaster declaration, a separate move from the lawsuit. Similarly, the county will receive a seven-day reprieve.

“I felt that this was the only move that I had to fight it,” the county judge said, referring to the declaration he signed Tuesday.

Four buses were arriving on a daily basis, but Tijerina said the city is unable to accommodate the numbers.

Laredo shelters were receiving migrants from the Del Rio and Rio Grande Valley Border Patrol sectors; though, due to a rise in the positivity rate of COVID-19 cases, many stayed longer during quarantine, diminishing bed space availability.

Hospital availability is among the highest concerns for the city, which only has two major hospitals, a population of about 260,000 and a rising number of COVID cases and hospitalizations, the mayor said.

“If Laredo has to be the venue for bringing them, then create hospital capacity,” Saenz said. “That’s a limiting factor for us. If you resolve hospital capacity, then things work out. Migrants can come. Our people can have room at the hospitals.” 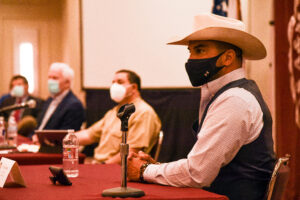 Tijerina said Ortiz notified him Border Patrol would be halting all migrant bus transfers from the Del Rio and Valley areas, a long-held practice by the agency to mitigate the impact of large migrant releases into local communities.

Tuesday’s declaration is separate from one Tijerina signed two weeks ago that aligns with Gov. Greg Abbott’s disaster declaration, which allows law enforcement officers to arrest migrants who trespass private property after crossing the Rio Grande.

Tijerina said the halt is temporary, but local leaders will be meeting next week to discuss potential next steps with Ortiz, the Border Patrol chief.

“They want to have a big meeting on Monday to discuss it a little further,” the county judge said.

Editor’s note: This story was updated to clarify the length of the city and county reprieves.