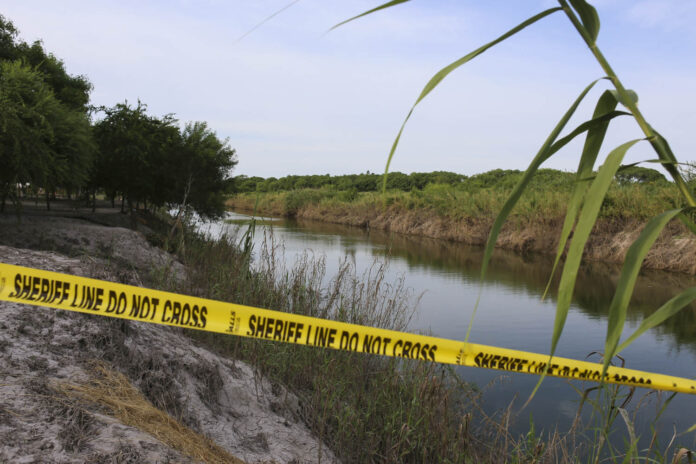 New information on the body of a young man from Guatemala found in the Rio Grande on Tuesday suggests that he may have drowned attempting to rescue a pregnant woman who tried to cross the river.

Matamoros-based outlet Noticias Fronteradice reported on social media that the man was identified as Edwin Rodrigo Castro de la Parra, 20, from Guatemala. He was one of several country leaders in the refugee camp on a dirt levee past the Gateway International Bridge.

The camp leader was identified by his wife, who stated that he went to bathe but did not return to the camp, according to reports from Mexico-based media.

Other reports stated that the body was first discovered around 4:00 p.m. by migrants who went searching for the young man. Law enforcement discovered the body sometime between 5:00 and 5:30, according to a Matamoros-based reporter who was on the scene.

According to a Newsweek report on Castro de la Parra’s death, the family — consisting of the young man’s wife, sister, grandmother, and a two-year-old daughter had been in the camp for more than 240 days.

Josue, a migrant in the camp, said the sister had recently given birth to a baby girl.

The family was taken to Ayudándoles a Triunfar, A.C. in Matamoros by Sister Norma Pimental, Executive Director of Catholic Charities of the Rio Grande Valley on Tuesday after authorities recovered Castro de la Parra’s body from the river.

According to EnlaceMx Noticias, Gladys Cañas — president of the center where the family was taken — told the outlet that the Guatemalan government has been asked to support the family in the transfer of the body.

Members of the Dignity Village collective providing aid and support to camp residents said they offered to give the family in a hotel room for a few nights before their return to Guatemala. The family has chosen to return, advocates reported.

Photos of Castro de la Parra show him smiling, standing in a group with other camp leaders earlier this year.

River crossings have picked up as morale in the shrinking camp dwindles due to postponed hearings under the “Remain in Mexico” program (MPP, Migrant Protection Protocols). Currently, asylum proceedings under the program are postponed until Texas reaches Stage 3 of its official re-opening plan, suspending court cases indefinitely.

CBP’s latest data on the program, recorded from MPP’s 2019 inception until July 17 of this year, showed that only 523 individuals returned to Mexico have been granted asylum in the United States.

Attorney Jodi Goodwin, who represents a number of MPP recipients in the tent court system across the river in Brownsville, wrote on Wednesday that an immigration attorney a few days ago sent a message out “basically encouraging people in MPP to cross the river because he had a client that made it and was released by BP.”

According to both Goodwin and advocates, several pregnant women recently crossed successfully and were released by Border Patrol.

On Tuesday, more pregnant women tried to cross despite warnings against strong currents in the Rio Grande, still running high due to recent rains.