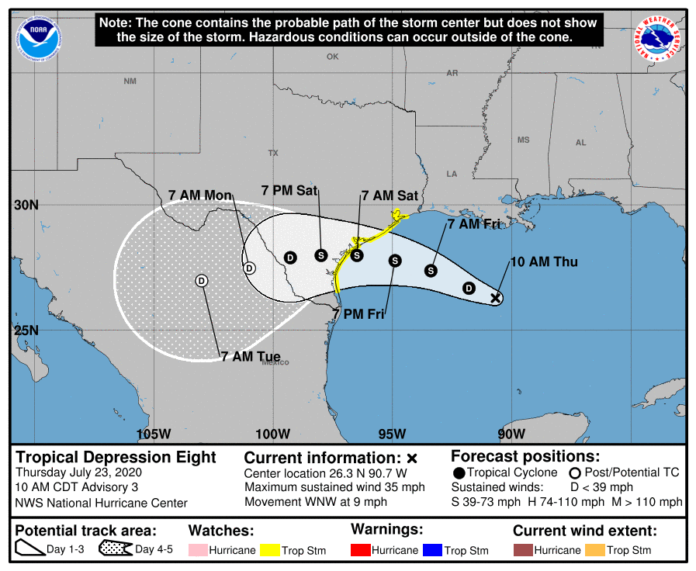 The National Hurricane Center has issued a Tropical Storm Watch from Port Mansfield to High Island, Texas, as a tropical disturbance makes its way across the Gulf of Mexico.

At 1 p.m., the center of Tropical Depression Eight was located near latitude 26.0 North, longitude 90.3 West. The depression is moving toward the west-northwest near 7 mph. Maximum sustained winds are near 35 mph with higher gusts.

The center of the depression is expected to move across the northwestern Gulf of Mexico today and Friday and make landfall along the Texas coast on Saturday.

The depression could become a tropical storm during the next 12 to 24 hours. An Air Force Reserve Hurricane Hunter aircraft found the depression to be southeast of the 10 a.m. advisory.

Heavy rains are likely over the Texas gulf coast this weekend with three to five inches of rain across most of the area. Some isolated areas from the Valley to Louisiana could get up to eight inches of rain.

This rain may result in flash flooding, rapid rises on small streams, and isolated minor flooding across the the coast.

The National Weather Service in Brownsville says afternoon heat index values could get as high 103 to 110 degrees today, especially in Starr, Hidalgo and Zapata counties.