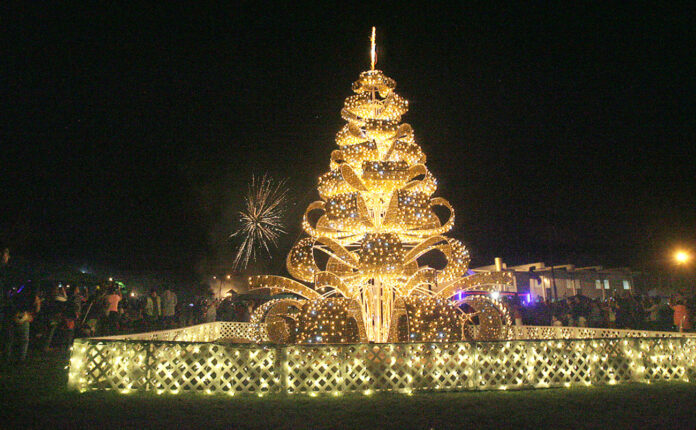 MERCEDES — Just after hundreds of twinkling lights flickered on to the approving murmur of the crowd, a crack-pop-boom of professional fireworks filled the air behind the city of Mercedes’ newest community attraction: its rare ribbon Christmas tree.

With the warm yellow glow of the tree’s lights illuminating their upturned faces, the crowd watched the fireworks. Some angled for the perfect selfie with the tree and the fireworks in the background, while others stood in mute awe. The celebration on the expansive lawn of the Mercedes amphitheater — which, itself, is new to the small city — was the culmination of a festive night meant to officially kick off the holiday season.

“ We’ve been working hard to give our citizens good things,” Mercedes Mayor Henry Hinojosa said proudly as children from the city’s schools performed dance routines and Christmas carols on the amphitheater’s stage.

However, the tree and its installation was not without some controversy. In a town that has, in recent months, faced some minor civil unrest in the form of demonstrations held outside city hall, the arrest of several residents at a city commission meeting, and the circulation of a petition to recall both the mayor and Commissioner Leo Villarreal, some were critical of the tree.

“ This is not about Christmas. This is not about the celebration,” said local citizen activist Israel Coronado as he, like hundreds of other Mercedes residents, gathered on the lawn to await the tree lighting.

“ I think this is good that we bring people in town. What we question … is the cost. And obviously, the planning,” Coronado said.

For months now, a group of residents have been critical of the city’s current leadership, posing questions about the city’s administrative, public safety and fiscal responsibility and accountability mechanisms. They have demanded greater transparency and have advocated for change.

City leaders purchased the so-called ribbon tree, one of just a handful of such trees in the world, last year. Mercedes spent over $100,000 to purchase the tree, as well as new decorations which will adorn the streets of downtown. The city also had to pay for shipping and professional installation of the tree.

Residents argue that’s a sum that could have gone toward more pressing concerns, especially in the wake of two 500-year floods that devastated large swaths of the town both this summer and last.

Coronado likened the city’s decision to purchase the tree to a person spending all their money to purchase a luxury car while their family remains at home without basic needs, like food, clothes or toiletries.

“ Where are my priorities? And I go back to that — the priorities of the leadership that we have are obviously not in the best interest of the public,” Coronado said.

The mayor disagreed, saying the people of Mercedes are worth a little celebration. “As you can see, the big crowd — this is a loud message to that little group that’s been talking bad about it,” Hinojosa said.

“ Our people are worth it. … They’re worth having a better quality of life,” he said.

For one pair of friends, the controversy over the tree is what brought them out to the tree lighting ceremony Tuesday. “I was pretty curious to see about the tree because everyone was talking about it,” said Brandon Davila, a college student from Mercedes.

Davila added that it was nice to see so many in the community gather at the little-used park for the tree lighting. “They don’t really do much here in Mercedes, other than the stock show,” he said. “This brought out most of the town.”

For Amy Silva, who lives in Weslaco, but works in Mercedes, the tree was the perfect encapsulation of the Christmas spirit. “I thought it was beautiful. I mean, it’ll bring a lot of cheer to a lot of people in the town,” she said.

“ It just looks enchanting. Like, it’s so beautiful. I can’t get over how beautiful it is,” Silva added a moment later.