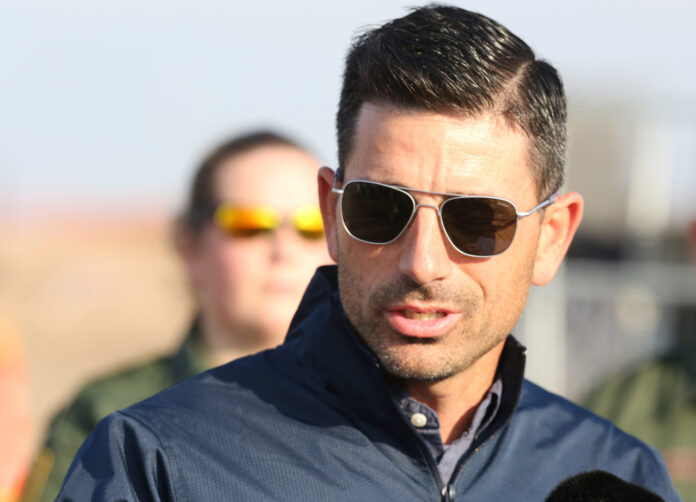 DONNA — The fifth person to lead the U.S. Department of Homeland Security since President Donald Trump took office in January 2017 was in the Rio Grande Valley on Thursday to meet with border officials and tour new border wall construction south of Donna.

Chad Wolf — formerly the acting Undersecretary of Homeland Security for Strategy, Policy, and Plans — was tapped by the president earlier this month to succeed Kevin K. McAleenan as acting DHS secretary. McAleenan, himself formerly the director of U.S. Customs and Border Protection, resigned as the head of DHS after approximately seven months in the Cabinet position.

Prior to McAleenan, the department was led by Kirstjen Nielsen — the most recent secretary to receive Senate confirmation, Elaine Duke and John Kelly, who was appointed when Trump first took office.

Sworn into office on Nov. 13, Wolf quickly made visiting the border a priority — traveling first to El Paso Wednesday before coming to the Valley. He spent the first part of his visit here attending a leadership meeting with senior Border Patrol officials before traveling to rural Donna, where the first new construction of border wall is currently underway.

In the shadow of two steel and concrete slab sections of wall that were flanked on either side by construction cranes seemingly standing at attention for the occasion, Wolf spoke to local media about the Valley being “ground zero for the security and the humanitarian crisis at the border.”

He lauded the wall’s effectiveness in reducing crime and in giving border agents a necessary tool to carry out their mission, championing the wall construction as a campaign promise kept by President Trump. “Simply put, walls work,” Wolf said.

Already, 83 miles of border wall have been constructed on the nation’s southwest border. Of approximately 500 total miles of wall construction anticipated to be completed “by the end of 2020,” some 110 miles are planned for the Valley, Wolf said.

“The new wall system is a game changer for stopping illicit activity, including activity carried out by transnational criminal organizations, or TCOs,” Wolf added a moment later.

It’s those TCOs that prey upon migrants, using them to distract U.S. border agents while committing crimes elsewhere, Wolf said.

However, his focus on transnational criminal organizations quickly pivoted to talk of so-called economic migrants who are “wrongfully” seeking asylum protections by exploiting loopholes in the current immigration system.

To that end, Wolf lauded two controversial policies enacted by the current administration — the “safe third country” policy and the Migrant Protection Protocols, also known as the “remain in Mexico” policy.

“Over the past year, the Trump administration has been forging international relationships and partnerships to address these vulnerabilities in our asylum system,” Wolf said. “These measures will discourage illegal aliens with non-meritorious asylum claims from coming to the border while allowing legitimate asylum seekers to pursue protections closer to home,” he said.

Under the safe third country policy, Central American migrants — those coming from the Northern Triangle countries of Guatemala, Honduras and El Salvador — would be required to first seek asylum from a country they traveled through prior to reaching the United States should that country have a safe third country agreement in place.

In July of this year, the U.S. brokered the first such agreement with Guatemala, meaning migrants from El Salvador and Honduras would need to seek asylum there even though a significant percentage of Central American migrants seeking asylum in the U.S. are themselves from Guatemala.

The policy officially went into effect after the administration issued a new rule Monday. And earlier Thursday, the first person to be affected by the rule, a Honduran man, arrived in Guatemala, according to multiple media reports.

The second policy change to be advanced by immigration officials this year are the Migrant Protection Protocols, wherein asylum seekers are required to wait in Mexico as their asylum claims play out in federal court. The implementation of the policy “has changed the dynamic at the border,” Wolf said during his visit.

“Agents and officers I talked to today here in the RGV are praising MPP and indicating that it is a game-changer in helping them address this crisis,” Wolf said.

Plans are in the works to expand the policy to Honduras and El Salvador.

But opponents of the new immigration policies say they are a violation of migrants’ civil rights, denying them of due process and putting them in the kinds of danger akin to what they originally tried to flee.

“MPP is really a massive violation of international law that is putting countless migrants at risk right outside our front door,” said Ricky Garza via phone Thursday evening. Garza serves as a local attorney with the Texas Civil Rights Project and was one of dozens of people who showed up in Donna to protest the acting secretary’s visit.

“The U.S. (has) essentially completely upended its obligation under international law to care for refugees and to let them seek safety in safety where they’re not actually being harmed,” Garza said.

Garza spoke of de facto refugee camps that have sprung up around ports of entry, including in Matamoros, Mexico, where asylum seekers languish for months in makeshift encampments along the banks of the Rio Grande that are overrun with the smells that come from the lack of sanitation.

The camps are far from safe, particularly to the types of vulnerable populations that should be exempted from the MPP policy — people with disabilities, pregnant women and members of the LGBTQ community, Garza said. “The State Department has a Level 4 alert encouraging people not to cross because it’s so dangerous there,” he said.

Attorneys for the Texas Civil Rights Project regularly travel to the camps where their clients await their fate in uncertainty. On Tuesday, one of those attorneys, Erin Thorn Vela, testified before Congress about the conditions her clients face. “The fact that the U.S. government knowingly permits abuse and torture to be the norm sends a devastating message: anyone can target asylum seekers there with impunity and no government will care,” Thorn Vela testified.

Her testimony stood in stark contradiction to assurances made by Wolf on Thursday that the government is committed to ensuring the safety of migrants. “Keeping migrants safe is a goal we all share, and that includes protecting them from TCOs,” Wolf said, after emphasizing that Mexican officials have been providing shelter, food and security to those migrants forced to remain in the country thanks to MPP.

For Garza, Wolf’s visit — one of several made by multiple high-level administration officials this year — was nothing more than a photo op, one opposed by the residents who live here.

“The Valley is a beautiful bicultural space that is made better when we have more bridges and fewer walls,” Garza said.