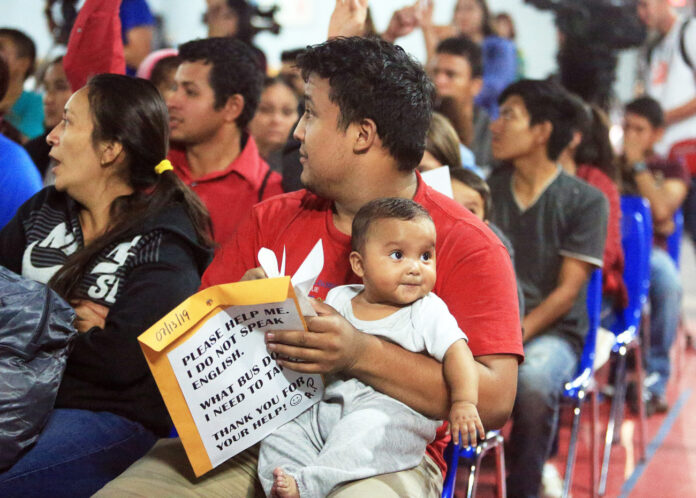 McALLEN — In early October, U.S. Rep. Henry Cuellar announced hundreds of thousands of dollars in federal reimbursements for local governments and nonprofit organizations that cared for migrants seeking asylum in the United States along the Texas-Mexico border.

None of those entities receiving money included the city of McAllen. The city is still waiting, and on Thursday, the national board for the Emergency Food and Shelter Program convened a meeting at the United Way of South Texas in McAllen in hopes of figuring out smoother methods of dispersing the $25 million in funds authorized by Congress this summer to reimburse the entities in border states.

About 25 representatives from city hall, Cuellar’s office, U.S. Sen. John Cornyn’s office and from nonprofits across the Rio Grande Valley attended the meeting. The national board, chaired by Michael Lee of the Federal Emergency Management Agency, is tasked with distributing the funds. Those municipalities and nonprofits have provided a safety net in the U.S. immigration system since 2014, caring for asylum-seeking migrants upon federal authorities releasing them into border towns.

Cuellar, Cornyn and others in recent months have assured that reimbursements are on the way, but the process has been so complicated for those involved that months into it, they didn’t even know who to call. On a recent conference call organized by Cuellar, McAllen Assistant City Manager Michelle Rivera asked if she could leave her phone number so she could be updated and relay the information to McAllen leadership.

Rivera and two other city employees who have worked on the reimbursement were at Thursday’s meeting, which kicked off with introductions, one by one, around the room. Lee, who ran the meeting seeking feedback, said: “we’re open for suggestions.”

“A few weeks ago I was promised a phone call,” Rivera said when the focus of the meeting turned to McAllen. “I haven’t received one.”

Yvette Balderas, one of the McAllen employees joining Rivera, outlined issues in the application process, including what expenses qualified for which category and which city departments, if at all, would be eligible for reimbursement.

“It, again, delayed all the processes we were trying to get done,” Balderas said.

Balderas was not alone. Nonprofit representatives from Cameron County also described a bogged down process and voiced similar concerns.

“Anyone have any creative ideas?” Lee said.

He was in search of a better second round of funding distribution, since more than $10 million remain to be dispersed.

“What we don’t want to do is recreate what happened this last round,” Lee said.

The room appeared to agree on that front.

“We’ll definitely be ready for round two,” Balderas said.

Round two applications are expected to become available in 2020.