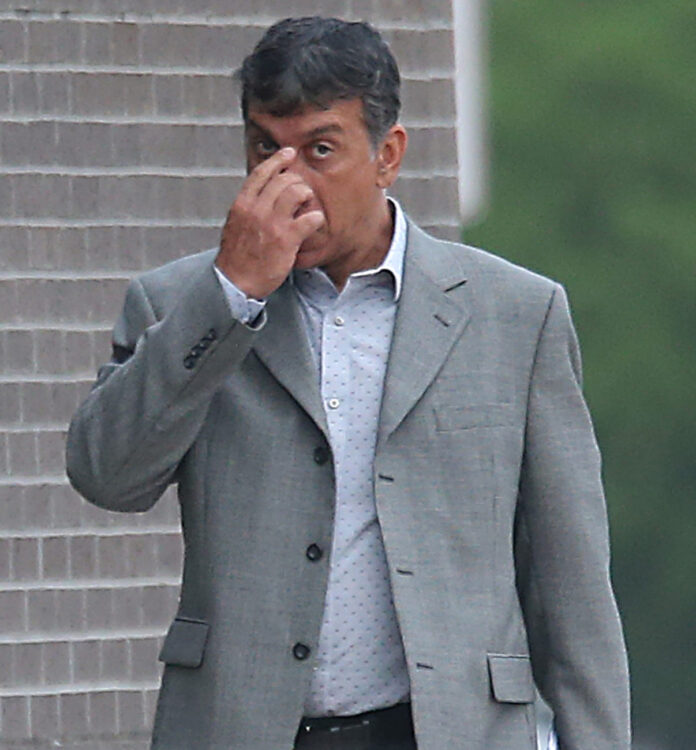 Wadhwani appeared before U.S. Magistrate Judge J. Scott Hacker to be arraigned on two felony counts related to a hotel development bribery scheme that has since been tied to an ongoing federal bribery case against several former public officials from Weslaco and Rio Grande City.

As he did during an initial appearance last Wednesday, Wadhwani pleaded not guilty to the two charges against him: conspiracy to commit honest services wire fraud, and wire fraud.

After the judge asked if he understood the nature of the charges against him and their potential penalties, Wadhwani waived a reading of the indictment in open court. The judge accepted his plea before releasing him from court. Wadhwani remains free on a $50,000 unsecured bond.

Some minutes after the hearing, Wadhwani could be seen exiting the federal courthouse alone and walking towards Bicentennial Boulevard. When approached by reporters seeking comment, Wadhwani ran to a vehicle waiting for him on the busy thoroughfare.

Wadhwani is accused of conspiring to pay bribes to Weslaco city officials in order to secure a favorable economic incentive agreement for a $3 million Motel 6 hotel development. Federal prosecutors have so far charged another man in connection with the bribery scheme, as well — Weslaco businessman Ricardo “Rick” Quintanilla.

According to the indictment, Wadhwani allegedly paid thousands of dollars in bribes in order to receive a $300,000 incentive payment from the Economic Development Corporation of Weslaco to develop the hotel.

Wadhwani, through a business associate identified in court documents as “Person A,” repeatedly communicated with the EDC in the spring and summer of 2013 to approve and disburse the incentive in two $150,000 payments, according to the indictment.

After several shakeups in both the administration and oversight of the EDC board of directors — including the departure of two executive directors, and the replacement of board directors with Weslaco city commissioners — the EDC approved the incentive agreement.

One of the commissioners who was appointed to the board during the restructuring was the “Commissioner A” listed in the indictment as a co-conspirator.

The EDC eventually issued the first $150,000 check to Wadhwani, who signed the agreement on behalf of a company called Nolana Self Storage, in December 2013. The second half of the incentive was paid out the following year, in November 2014.

Quintanilla, meanwhile, is currently one of three defendants in a separate bribery case involving the $38.5 million rehabilitation of Weslaco’s water plant facilities. One day after Wadhwani made his initial appearance in court last week, Quintanilla turned himself into the FBI and was himself arraigned in the hotel bribery case.

Shortly after the news of the hotel bribery scheme broke, prosecutors officially linked the case to the ongoing Weslaco water plant case when they filed a “notice of related cases” last Thursday.

How exactly the cases are related remains unclear, though the two share some overlap — both in the timelines prosecutors allege the two schemes occurred, as well as commonalities between some of the figures named in court records thus far.

Quintanilla, for instance, has now been named as an alleged participant in both schemes. And in the indictments for the two cases, prosecutors describe Quintanilla’s role in the schemes as that of a sort of intermediary — alleging he accepted bribe payments that he would, in turn, use to bribe others while keeping some of the proceeds for himself.

The 14-page indictment against Quintanilla and Wadhwani alleges that Quintanilla profited “by keeping a portion of the bribe funds paid to him by Wadhwani” before paying the remainder to a Person B and Commissioner A.

Meanwhile, in the 74-count superseding indictment in the Weslaco water plant bribery scheme, Quintanilla is alleged to have accepted nearly $90,000 in checks from now-former Rio Grande City municipal judge Leonel Lopez Jr., then cashing them before giving approximately half the proceeds to then-District 4 Weslaco Commissioner Gerardo “Jerry” Tafolla.

All four men pleaded not guilty at their arraignments this spring, though in August, John Cuellar changed his plea to guilty after reaching a deal with prosecutors.

Originally facing 61 separate charges as part of the 74-count indictment, John Cuellar pleaded guilty to one count of conspiracy to commit honest services wire fraud. His sentencing has been set for mid-January 2020.

The remaining three defendants in the case will head to trial this December after a plea deadline passed Oct. 11 with no word of additional plea agreements.