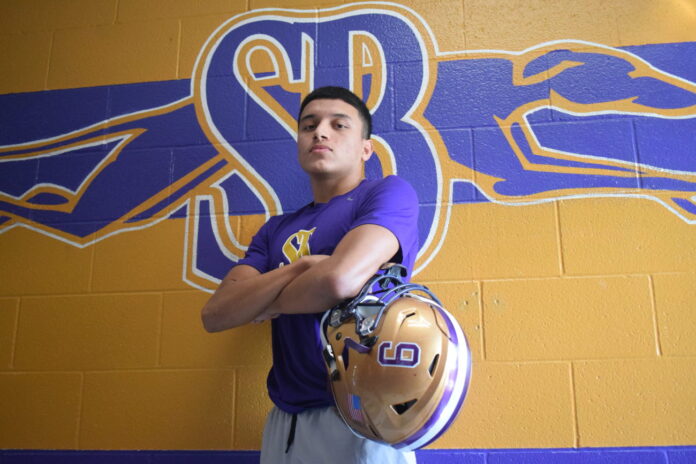 SAN BENITO— While the season is still young, one thing is certain. The San Benito defense has gotten off to a strong start and are as physical as any unit. One key ingredient of the Hounds’ defense this year has been the play of senior corner back Ciro Munoz. The 5-foot-10 corner has played lights out through the first two games and had a strong camp.

Munoz, who grew up in San Benito, played TYFA and came through the San Benito ranks, has been a part of some big games. In fact, Munoz was a sophomore during the 2017 season when the Greyhounds had arguably one of the best teams in program history. Munoz knows what the playoffs, Battle of the Arroyo and district titles all taste like and has an opportunity to reach the third round of the playoffs for a third straight year.

“This game has always been my sport, it is the love of my life,” Munoz said. “I have always played this game.”

Munoz, who is tall with a long range and built like a defensive back, played wide receiver and tight end in junior high. That all changed when he got to high school and the coaching staff moved Munoz to cornerback.

“Coming into high school I became a DB.

The coaches like my length and my quickness,” Munoz said. “It did not matter to me, I didn’t hate it, I love every opportunity the coaches give me.”

Munoz looks up to NFL cornerback Jalen Ramsey, but while Munoz loves the Ramsey’s playing style, his true role model is former Greyhound Nick Castaneda, who was a mainstay defensive back for San Benito over the last few years.

“He (Nick) is my role model. His spirit, his work ethic is right up there and he was just one of those guys you wanted to be at the varsity level,” Munoz said. “Albert Mercado too shout out to him.”

Munoz has filled in Castaneda’s shoes quite well this season. The Greyhounds have continued the reload long-running pipe line each year in the secondary, from Payne Guajardo to Munoz.

“I learned a lot from Nick, from the skills he had to learning to play the run and learning pass coverages,” Munoz said.

“He was just a really fast dude and he would make plays. He was just a play maker. Those were some things I learned, and playing opposite of him was awesome, we had a great connection and we are still good friends.”

Castaneda showed up to the Greyhounds’ season opener and gave Munoz some simple advice.

“He (Nick) came to the field house before our game and spoke to us,” Munoz said. “We talked a bit and he just to me to ball out and for us to show them what we got.”

Munoz and the Greyhounds are 1-1 on the year and will travel to PSJA High tonight at 7 p.m. to take on the Bears in The Valley Morning Stars Game of the Week.