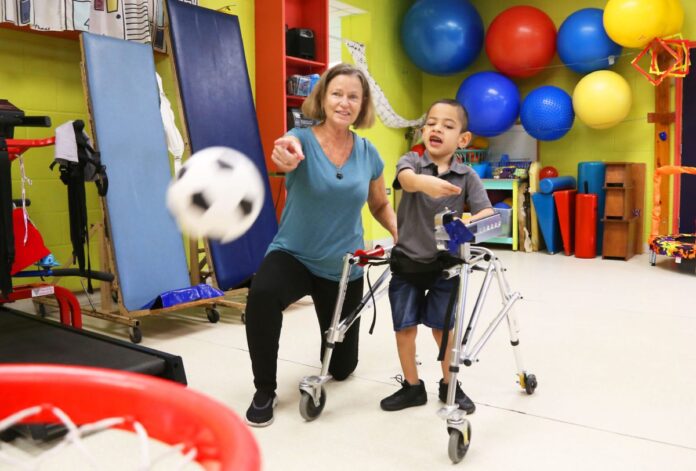 BROWNSVILLE — The Moody Clinic’s relationship to the Moody Foundation of Galveston goes back decades.

When the nonprofit first received funds to build the clinic during the 1960s, it decided to take the foundation’s name, said Jessica Cuevas, executive director.

Since its inception, the clinic has served more than 7,000 children.

“I think that’s just amazing that we’ve seen that many kids,” Cuevas said. “It’s not just the children that we help, but the families.”

The organization recently received a $1 million grant to be dispersed during a three-year period that will help the clinic provide speech/language, physical and occupational rehabilitative therapy to children with special needs.

Currently, the Moody Clinic subsidizes the cost for 67 percent of its patients. It sees about 65 to 70 patients each month, Cuevas said.

Before receiving the grant, the Moody Clinic was visited by Allan Matthews, the grants director of the Moody Foundation.

Moving forward, one of the biggest changes the Moody Clinic will implement is designating one employee as the person responsible for billing and authorization.

The clinic receives an influx of referrals and cannot ask an insurance company for authorization for an evaluation. That has to come from the doctor who referred the patient. Being able to help the doctors to get that sorted out quickly is important, Cuevas said.

Families are put on a sliding scale, based on their ability to pay for treatment.

“We don’t feel a family should have to go bankrupt because of their child,” Cuevas said.

To that end, the Moody Clinic hosts at least four major fundraisers per year, and some other smaller events in between.

“We want to keep the doors open for another 65 years and to serve the most needy in the Brownsville community,” Cuevas said.

“We’re just really honored to see this grant, and we can’t thank everyone enough — the families, the staff, the board of directors. We’ve got to be diligent in how we continue down this road and implement changes.”