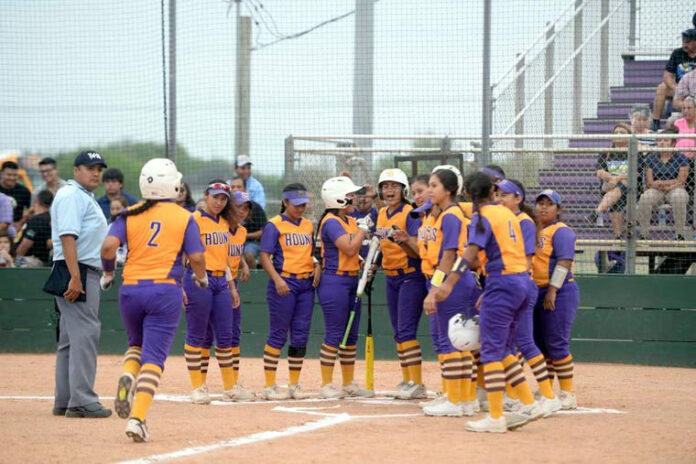 SAN BENITO—Score early and score often has been San Benito’s motto when it comes to its offense.

The Lady Hounds sent a statement with their bats Thursday as Joanna Gonzalez and Aaliyah Rangel both clubbed home runs en route to an 11-1 five-inning win over Edinburg Vela in Game 1 of their Class 6A bi-district playoff series.

The Lady Hounds will look to wrap up the series tonight at Edinburg Vela.

“I thought we had a great week of practice; the kids were anxious to get a game in since we hadn’t played since last Tuesday,” said San Benito coach Kristy Leal. “We played a clean game and we made the plays when we needed to.”

San Benito sent an early message as senior hurler Diandra Padilla struck out the side in the top of the first inning and then in the bottom of the frame Gonzalez belted a two-run home run giving the Lady Hounds a 2-0 lead.

Vela rebounded in the top of the third on an RBI single from Taylor Chavez, cutting the lead to 2-1. However, that was as close as Vela would get.

After a silent third inning, the fourth inning would be the game changer for the Lady Hounds as they opened up their offense with a selective and patient approach at the plate.

Padilla got the offense going with a leadoff double and Audrey Huerta followed up with a single, setting the stage for Rangel, who extended the lead to 5-1 with a three-run homer.

Alina Jasso and Padilla would also collect RBI singles in the inning, helping extend the Lady Hounds’ lead to 8-1.

San Benito then batted around the order and plated nine runs on six hits in the frame, putting the game out reach.

“Offensively we put together a great performance; everyone had a great approach at the plate. We knew Vela had strong pitching coming in and we put it all together tonight,” said Leal.

Padilla dazzled the home crowd with a dominate performance in the circle. The southpaw tossed five complete innings, striking out five while giving up just one run on four scattered hits.