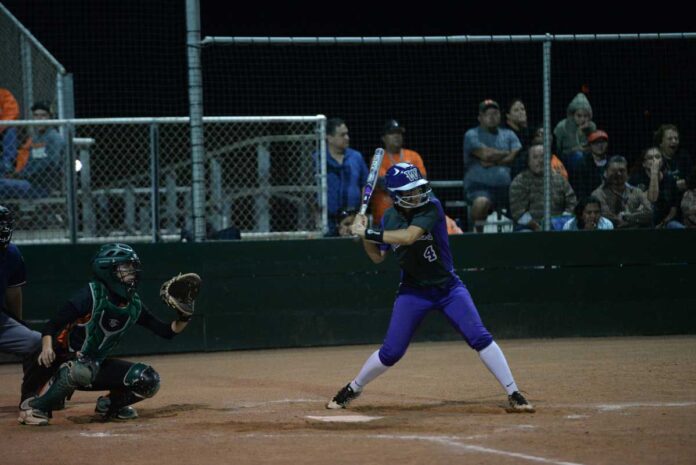 HARLINGEN — The Weslaco Lady Panthers continue to roll in District 32-6A.

A two-run home run by Audrey Escamilla set the tone as Weslaco clubbed Harlingen South 10-1 on Tuesday night in at Lady Hawk Field.

With the win, Weslaco completed the season sweep against Harlingen South, extended its win streak to six in a row and remained tied with San Benito for the top spot in the league with an 11-1 mark.

The Lady Panthers and Lady Greyhounds will lock horns Thursday when Weslaco travels to San Benito. San Benito defeated Weslaco 3-2 earlier this season. Thursday’s matchup will decide the district title barring any type of slip ups in the final week.

With the loss, Harlingen South falls to 5-5 and dropped out of the playoff race for now with two games remaining against Weslaco East and Brownsville Rivera. Both Weslaco East and Los Fresnos picked up wins placing them in the final two spots in 32-6A.

“The home run from Audrey got us going,” said Weslaco coach Mario Rodriguez. “We came into tonight wanting to play smart and tough. Harlingen South came in ready to play. This win is big for us. It’s getting closer to playoff time and we want to be playing our best ball.

“I thought our girls brought the intensity tonight and got the job done offensively.”

Weslaco swung away and combined for 10 runs on 11 hits. Alyssa Escamilla went 3 for 4 at the plate with three runs and an RBI. Madelyn Ybarra checked in a 2 for 4 night with and RBI. Escamilla’s lone hit of the night was the two-run homer as Escamilla finished 1 for 3 at the plate.

Harlingen South managed to cut the lead 3-1 in the bottom of the third inning on an RBI single from Ashely Reyna. That’s as close as the Lady Hawks would get though.

Weslaco padded its lead with a three-run fourth and four-run sixth to put the game out of reach. The four-run frame was highlighted by a pair of RBI doubles from Taylor Tafolla and Mikayla Trevino.

Ashley Sada came on in relief in the fifth and went the final three innings, walking two, fanning four, while allowing no runs on no hits.

“It’s a trend we started at the beginning of the year, Taylor will start the game for us and Ashley has done a great job on coming in and shutting the door. It’s a good one-two punch. They are two opposite pitchers and it has worked out well for us,” said Rodriguez.