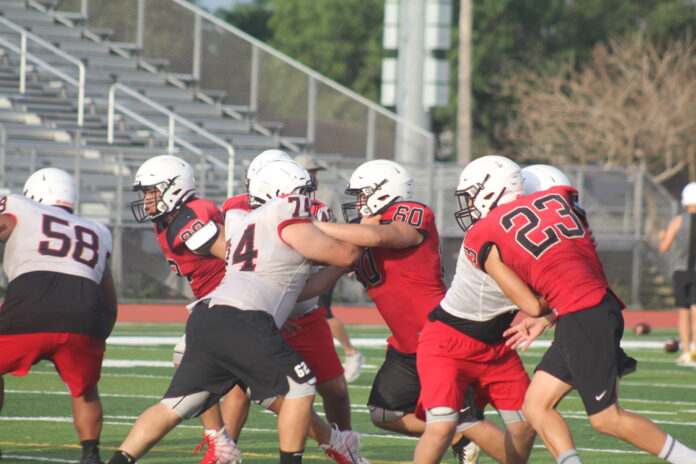 Week 1 is in the books, and several East Valley football teams got their seasons started with impressive performances.

Harlingen High, the highest ranked team from the area in the RGVSports.com top 10 poll, held on to its No. 3 spot with a 34-10 win over Laredo United South. Joe Lopez and Aaron Ruiz shared reps at quarterback. Lopez threw three touchdown passes, one for 65 yards to Gerardo Balli, a 43-yarder to Izaiah Bell and one for 36 yards to Isaiah Perales.

Bell added to the score in the rushing game and was a top offensive weapon for the Cardinals. Senior Nathan Huerta was a force leading the defense, recording sacks and tackles for loss to set the tone for the unit.

Two new teams debuted in the top 10 in No. 9 La Feria and No. 10 San Benito. The La Feria Lions defeated Raymondville 44-26 on the road. They came out guns-blazing to score 20 points during the first quarter and held a 32-6 lead at halftime.

The San Benito Greyhounds held off McAllen Rowe 20-13 at home. The contest started all about offense with the teams tied at 13 after the first quarter. San Benito’s defense wreaked havoc to clinch the win. The ’Hounds recorded 3 1/2 sacks, three interceptions and one fumble. Mariano Garcia and Nova Bejaran had solid defensive performances in the opener.

Lyford opened with a 40-10 victory over Santa Rosa at home, and Rio Hondo traveled to La Joya Juarez-Lincoln and left with a blowout 65-0 win. Both teams received votes but did not crack the top 10 poll.

Lyford junior quarterback Osmar Martinez was 12-for-18 with 313 yards and four touchdowns in the air. Justin Vela hauled in six catches for 230 yards and three scores. Osmar and Oscar Martinez anchored the run game, each scoring one touchdown with 160 and 71 yards rushing, respectively. The Bulldogs also notched two interceptions, courtesy of Oscar Martinez and Adrian Cruz.

Senior running back Ethan Jeradiah was a star for the Rio Hondo Bobcats, accumulating 208 yards of offense and four touchdowns. Quarterback Zechariah Rios threw two touchdown passes and picked off his counterpart for a score. Tomas Arredondo scored twice, once on a punt return, and had 122 receiving yards on seven catches with one touchdown.

The Port Isabel Tarpons opened with a dominant win over Brownsville St. Joseph 54-6, led by Gilbert Medina’s big day that ended with more than 300 all-purpose yards and three touchdowns.

Brownsville Rivera lost its opener 20-17, but showed promise by taking No. 4 PSJA North to overtime. Rivera scored all of its points in an admirable second-half comeback attempt on two rushing touchdowns and a field goal.