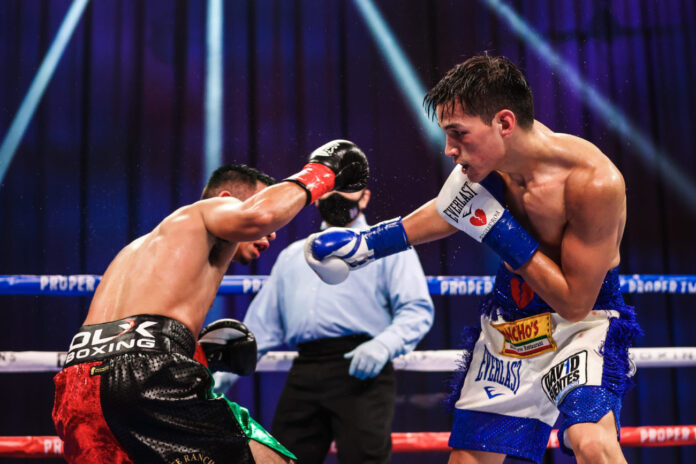 Figueroa (21-0-1) used a barrage of power punches — 246 to be exact — to leave his opponent’s right eye bruised and battered. Once “The Heartbreaker” saw Vazquez wearing the damage on his face, Figueroa went for the kill — a right-handed cross followed by two devastating hooks to Vazquez’s body which forced the referee to call a stoppage to the fight.

“I felt good tonight. He was a lot tougher than I expected; I was punishing him to the body and head,” Figueroa said. “He was taking a lot of punishment and just trying to jab and survive in the last few rounds. I have to give him credit for being tough. He came to fight and proved he deserves to be in the ring with me. I knew with the pressure I put on, he wasn’t going to last 12 rounds.”

Before the fight, Vazquez said he wanted to make Saturday night’s bout against Figueroa “a Mexican war.” “The Heartbreaker” made sure he wound up on the winning side with a convincing TKO of a game opponent and the 16th KO/TKO of his career.

“This shows that I can fight under pressure, I’m strong and I give exciting fights. That’s what fans want to see. I always leave everything in the ring and that’s what I did tonight,” Figueroa said. “I knew that I was going to win. We prepared great for this fight after having injuries in my last camp. All the hard work in the gym really paid off tonight.”

“I’m ready for anyone. I know I belong with the best fighters in the division. I just want to give fans great fights,” Figueroa said.