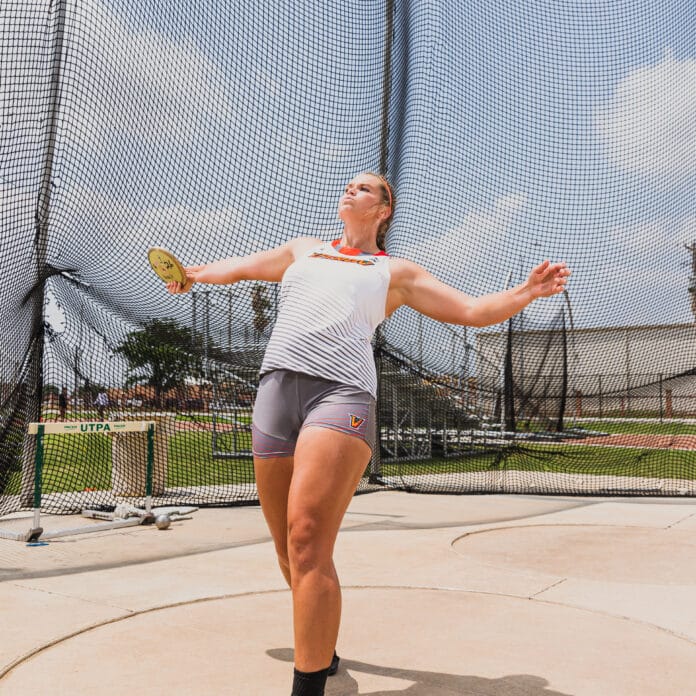 EDINBURG—After a five-hour rain delay, UTRGV thrower Desirea Buerge made her way into the ring for her first attempt of the day in the discus.

The rain could not prevent the inevitable as Buerge, who ranks No. 6 in the U.S. in the women’s discus, recorded a mark of 175 feet, securing the conference title on her first throw of the day at the Western Athletic Conference Outdoor Track and Field Championships in Edinburg on Saturday.

On the day, Buerge posted the top-five throws in the event, with the second-place finisher, New Mexico State’s Makiya Moore, posting the next closest toss with a mark of 150-1.

“The first throw, I got it in and thought I got a mark and now I don’t have to worry about getting a good mark,” Buerge said. “Now, it was just time to move it. It’s always great to win something for the team because it is a team sport at the end of the day. Doing my part and placing where I’m trusted to place, I love being able to help the team out to get our points and help up to a conference win hopefully.”

Joining Buerge at the top of their individual events was sophomore sprinter Tamara Woodley, who earned 20 points for the Vaqueros after coming away with gold in the 200-meter and 400-meter dashes. Woodley’s time of 53.54 seconds during the 400-meter dash ranks No. 2 in program history.

In total, Goode collected three medals (1 gold, 1 silver, 1 bronze), including a conference crown during the 100-meter hurdles with a blazing time of 10.60, breaking her own school record for the sixth time this year.

For the men, UTRGV thrower Paul May capped off a dominant WAC Championship meet with a second-place during the discus on Saturday night. In total, May earned a team-leading 26 points for the Vaqueros, including a WAC title in the shot put.

UTRGV distance runner Max Carmona also earned a conference title, cruising to victory in the 800-meter run with a time of 1:52.69.

In the relays, the Vaqueros men’s 400-meter relay team, consisting of Yashawn Hamilton, Yariel Matute, Mariano Hernandez and Jermarrion Stewart, posted a blistering time of 40.73 on their way to the conference crown.

Despite the Vaqueros bringing in 29 medals, it was Grand Canyon’s men’s and women’s teams, that took home a meet high 37 medals, sitting at No. 1 in the overall team standings at the end of the meet with 263.5 and 208 points, respectively.

The win by Grand Canyon marks the third straight WAC title for the women. Meanwhile, the men win their first conference title since 2018 and their third in program history.

Utah Valley finished the meet in second place in the men’s standings with 192.5 points followed by UTRGV in third with  175 points.

Rounding out the top three in the women’s standings were New Mexico State in the No. 2 spot with 163.50 points, with UTRGV finishing No. 3 with 136 points.