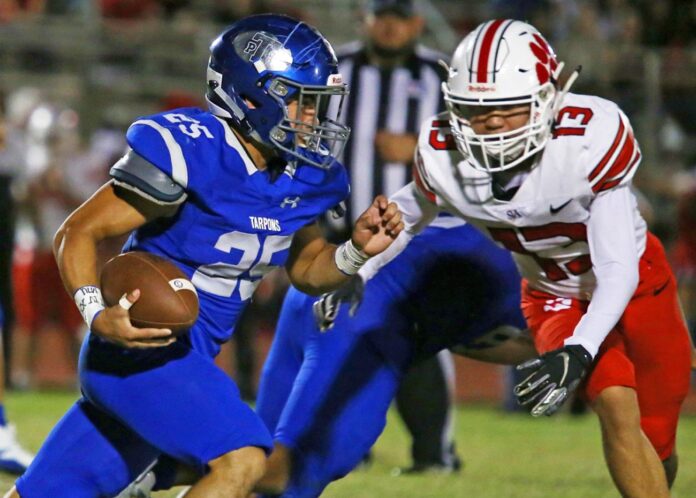 Point Isabel ISD announced Wednesday that it was canceling the Tarpons’ game against the Raymondville Bearkats scheduled for Friday, effectively ending Port Isabel’s season after playing just one game.

The administration released a notice stating “student athletes possibly coming in close contact with an individual that has tested COVID-19 positive while participating in an athletic event” as the reason for the cancelation. The Tarpons played the PSJA Southwest Javelinas last Friday and were notified Wednesday about someone with the Javelinas testing positive.

“I told the kids we had to be perfect, not for football, but in regards to COVID. And we were. Our team didn’t have any symptoms or anything like that, but we were exposed,” Port Isabel coach and athletic director Tony Villarreal said. “It was a tough call, but at the end of the day … our school board, our superintendent and our principal made the call for safety and that’s just what it is.

“The sad thing about it is, I just got to meet the kids a few weeks ago,” Villarreal continued. “It was maybe 10 weeks on Zoom, and these kids did everything we asked them to do. These kids are very obedient, mentally tough, they all wanted to play and they showed up every day. Just to line up and play against probably a playoff team in PSJA Southwest, play them to the very end like our kids did, was remarkable.”

Port Isabel didn’t start practicing until Oct. 12, but even with just three weeks of practice the Tarpons battled hard in a 35-28 loss to the Javelinas. The game with Raymondville was the only District 16-4A Division II game on either team’s schedule. With the win due to forfeit, the Bearkats clinched the No. 3 playoff seed in the district despite only playing one game this season.

Raymondville defeated Victoria West on Oct. 9, then had to cancel two games due to the program being quarantined because of exposure to COVID-19. Bearkats coach and athletic director Frank Cantu said he called some teams to try to pick up a game, but their future playoff game got moved to next Thursday instead of Friday, so they elected to use the extra time to practice and get ready for their first action in five weeks.

“I was kind of shocked. I was, like, ‘Is this for real?’ while I was talking to (Coach Villarreal),” Cantu said. “We told our kids, and of course they were down because they were really looking forward to playing. We haven’t played in weeks, and we’ve had some good practices and we were really ready to go. But at the end of the day we’re in the playoffs, so continue to have a good attitude and let’s go get after our opponent.”

Cantu said Raymondville’s bi-district playoff game will be Nov. 12 at Cabaniss Field in Corpus Christi. The Bearkats will face the winner of this week’s Devine-Crystal City game, and Cantu said they’re expecting to be facing Devine. Raymondville is pushing strength and conditioning to get the stamina up in anticipation for a long postseason run.

“Our main focus has been getting some running and some weight work in,” Cantu said. “We’ve always felt that if games go deep and they’re tight in the third and fourth quarter, that conditioning is going to help you. That’s what we’ve been focusing on, running and lifting and conditioning, so there’s something in the tank. They’re foaming at the mouth to play.”

Villarreal said seeing how his team handled a challenging year taught him a lot about his players. He said it was tough to give them the news about the season ending prematurely, but he’s proud of how they handled it and the effort they showed while the season lasted.

“We couldn’t even meet with them. We had to tell them over Zoom. You could tell it hurt them a lot, especially the seniors,” Villarreal said. “I could tell it was killing them, but they showed a lot of class and dignity. I always say, ‘The best play is the next play,’ so let’s get up and go to work. Let’s get ready for college, let’s play basketball, let’s do something to get ready for next season. I’m very proud of our kids, especially our seniors, Joey Kreighbaum, Adrian Nino, Aaron Villarreal. All our seniors played their guts out.”