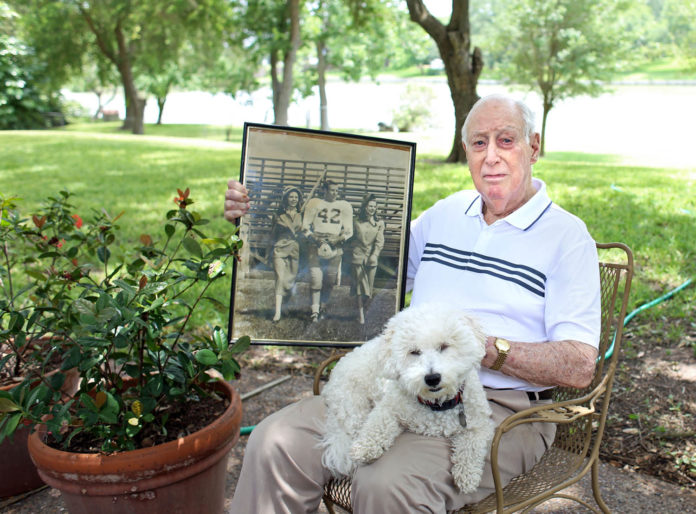 The cause of death was respiratory distress.

As of Saturday, funeral services were pending.

Parker was a multi-sport athlete who earned nine letters before graduating from Brownsville High in 1947. Football is the sport for which he is best remembered, and it’s the sport that helped him gain induction into the Rio Grande Valley Sports Hall of Fame in 2019.

He was also a post on the basketball team and ran the open quarter mile in track for the Golden Eagles.

In football, Parker played center and linebacker, and he was a member of coach Bob Martin’s 1945 District 16-2A championship team that went 10-1. The Eagles were ranked No. 9 in the state that season. When he was a senior, Parker was chosen to play in the Texas All-Star Game in 1947 after earning all-state honorable mention recognition.

After high school, Parker received a scholarship to play football at the University of Texas at Austin. He played for the Longhorns two seasons before a career-ending knee injury at the start of his junior season halted his playing career. Parker was a member of the Longhorns team that defeated the Georgia Bulldogs 41-28 in the 1949 Orange Bowl.

At one time, Parker was named the center on the all-time Brownsville football team. The Brownsville Herald listed Parker as one of the city’s top versatile athletes in 1960.

Parker earned a business administration degree from UT-Austin in 1951 and became a successful businessman for many years at the Port of Brownsville. He was owner of the Gateway Harbor Tugboat Co. before retiring in 1998.

Frank Parker Jr. said his father developed a passion for playing golf, especially during his retirement years, and he continued to play the game with an 8-handicap at one point until health reasons forced him to give it up at age 88.

“My dad loved golfing, and he was pretty good at it for a while until he got older,” said Parker Jr., also a Brownsville businessman. “He would play three or four times a week. Rancho Viejo (Resort) was his favorite course. There was a group of about 12 to 15 (older) guys who would play golf (together in foursomes), and he was the last of that group. The others died, so he ended up having to start playing with younger guys.

“He liked to fish, too, and he taught me how to do that,” Parker Jr. added. “He was someone who liked to go to church every Sunday. He was also on the school board in Brownsville for a while, and he was a Rotarian, too.”

Parker Jr. said his father was always concerned about providing for the family, which included wife Carolyn, himself and five younger sisters.

“He was dedicated to taking care of us,” Parker Jr. said. “He provided for all of us and put us all through college. He was just a great dad, who helped all of us get a car and even paid our (auto) insurance. He just took care of us.”

Induction into the RGV Sports Hall of Fame meant a lot to his father, Parker Jr. said.

“I think by him being in there, it helped prolong his life,” Parker Jr. said. “His induction was something that really helped him out. He had been in the hospital for 21 days and got out a couple of weeks ago. He just did not want to go back to the hospital. He was ready to go.”

When interviewed for a story prior to his induction in June 2019, Parker Sr. said he was grateful to receive such recognition.

“I feel very honored,” Parker Sr. said during the interview. “Playing sports has been an influence and a very big part of my life. I’m a competitive person, and I always want to be first. I don’t think that’s selfish.

“Getting this honor is something all athletes strive for,” he added. “It’s nice to be recognized for one’s efforts. It’s very thoughtful of them to do this.”