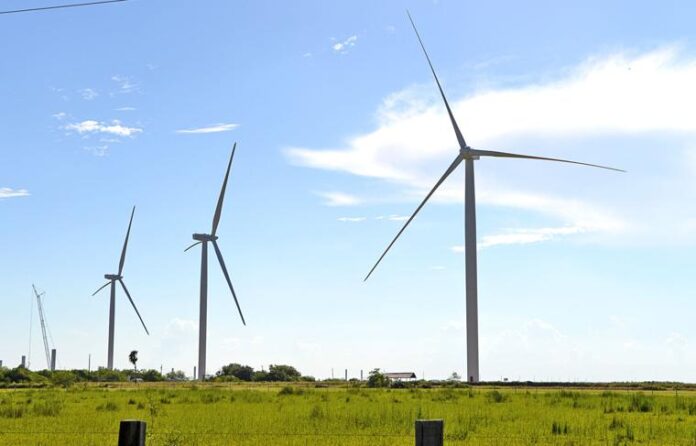 High temperatures and peak usage at the start of last week, combined with an unusual amount of the state’s generating capacity being offline in part due to mechanical problems, prompted the Electric Reliability Council of Texas to issue an Energy Emergency Alert and plead with Texans in the Valley and elsewhere across the state to reduce their energy usage to avoid rolling outages.

This week, high temperatures and usage were not accompanied by an alert from ERCOT, which on Monday reported a sufficient supply of electricity to serve demand on the grid. A big difference between this week and last week, according to Brownsville Public Utilities Board General Manager John Bruciak, is that now the wind is blowing.

On June 14, the day ERCOT issued its alert, a developing tropical system in the Bay of Campeche (now Tropical Storm Claudette) shut down wind speeds not just along the coast but also in West Texas, effectively removing the more than 20 percent of the state’s electricity generated by wind.

“We’ve got plenty of capacity, it’s just if the wind stops it’s a problem,” Bruciak said. “When you can drive up the coast here and you can’t see any of those blades moving, that’s not a good sign.”

BPUB Chief Operating Officer Fernando Saenz said summer is generally more manageable than winter in terms of sustaining the grid, since demand drops at night, and that the rolling blackouts the state experienced in February have made residents more responsive when ERCOT issues a call to reduce consumption.

“If they listen it really helps,” he said. “I work in an office without the light on. I do my part. I need everybody else to do their part, across the entire state. Nobody wants to be without power, especially when it gets so hot.”

Texas was able to avoid rotating outages last week because residents paid attention to the ERCOT alert, Bruciak said. Whether a similar windless scenario repeats itself this summer, with the National Oceanic and Atmospheric Administration forecasting a busy hurricane season, Bruciak said that “if the wind doesn’t stop and we don’t get anything in the Gulf we should be fine.”

One issue is that Texas lacks sufficient natural-gas-powered generation to make up for the drop in supply when the wind stops, he said. While there are plenty of financial incentives for building wind farms, those same incentives do not exist for construction of gas-fired plants, Bruciak noted.

“They’re expensive to build and the people that run them aren’t in the business to lose money,” he said.

Following February’s winter weather disaster, Warren Buffet’s company Berkshire Hathaway pitched an idea to Texas lawmakers: The company would build 10 new gas-fired plants at a cost of $8 billion for weather emergencies. In exchange, lawmakers would impose an extra charge on residents’ electric bills to provide Berkshire with a return on its investment. The plan was rejected.

Bruciak said BPUB’s Silas Ray Power Plant, built in the late ’50s or early ’60s, has been running around the clock during the hot weather even though it’s only meant to serve as a “peaking unit” that comes online in late afternoon when demand spikes. Silas Ray is capable of operating as a full-time “base load” unit, which it originally was, though it’s inefficient and more costly to run compared to newer plants and more wear and tear is inevitable, he said.

Heat preparedness includes drinking plenty of water and wearing loose, lightweight clothing; finding shade or taking breaks inside with air conditioning; applying and reapplying sunblock frequently, according to the bulletin, which also warned resident to “look before you lock.”

“Interior vehicle temperatures can rapidly climb, quickly becoming hazardous to children or pets in the back seat,” the NWS warned.

After School Summer Camp was a success