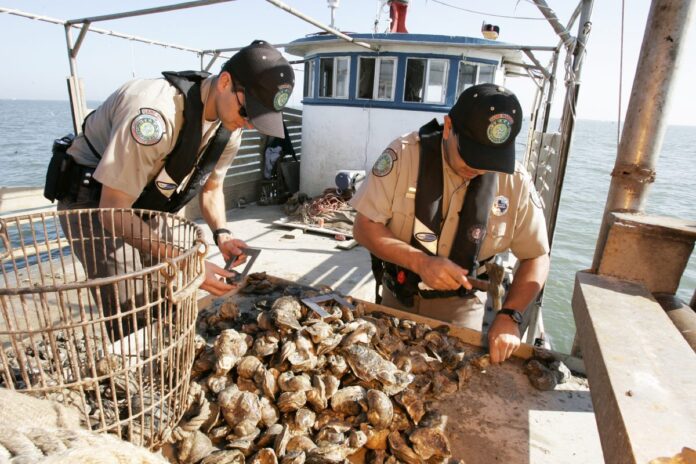 Registration is required and there are still a few slots left according to the man leading the workshop, Mario Marquez, Texas Sea Grant’s oyster aquaculture specialist. Attendees will learn the nuts and bolts of oyster farming, including permitting requirements, which are extensive and include applying to TPWD and the U.S. Army Corps of Engineers. It’s also necessary to secure a water lease from the Texas General Land Office.

A representative from the Texas Parks and Wildlife Department will cover all that, while Marquez himself will speak on hurricane preparedness, how to obtain oyster seeds (small oysters) to start a farm, and bio-security protocols. Unlike wild-caught oysters, which are dredged from the bottom, aquaculture oysters are grown in cages on top of the water column, said the Brownsville native.

The workshop will also include speakers from the Harte Research Institute for Gulf of Mexico Studies at Texas A&M Corpus Christi, which has set up oyster farms: one at Copano Bay and the other on Matagorda Bay at Palacios, Texas, where he’s held oyster aquaculture workshops before.

This won’t be his last swing through the Valley. Marquez said he’ll be back at the Coastal Studies lab for future workshops, he just doesn’t know when yet. Texas was the last Gulf Coast state to allow oyster aquaculture, which the other Gulf states have been doing for a decade and the Northeast for 30 years, said Marquez, who is wrapping up his doctorate and spent six years in Florida researching oyster farming.

“When I heard that oyster aquaculture was going to start in Texas I was like, dude, I’ve got to go,” he said. “I’ve got to go help my state do this.”

Now the industry is poised to explode along the Lone Star coast, he said.

“Texas does not know what’s going to hit them,” Marquez said. “It’s about maybe a year, maybe two years away from booming. We’re kind of at our infancy. But once the farms start to set up and once they start to produce it’s going to be awesome. They’re going to start seeing oysters that they’ve never seen before.”

In the Valley, the Lower Laguna Madre already has wild oysters and could support oyster aquaculture, though the lagoon’s hyper-salinity means the oysters that live in it are on the salty side — a plus for those who prefer their oysters on the half shell savory as opposed to sweet.

“Typically oysters do not grow in such salty water like that, but we actually do have oysters growing there naturally,” Marquez said. “There’s been research done for probably the last 20 years, and they have found that these oysters are genetically adapted to thriving in these salty conditions.”

If oyster aquaculture gets a foothold here, a patron of an oyster bar in, say, Austin or Houston could someday sample sweet oysters from Galveston and salty ones from the Lower Laguna Madre, he said.

The National Marine Fisheries Service estimated that in 2017 the oyster aquaculture industry generated $187 million, he said.

“Texas had nothing to do with that because we didn’t have it,” Marquez said. “But the thing is, we have the waters. We have great waters here and we have a long coast. We have a lot of water. We have a lot of acreage. I’ve seen these oysters grow and they’re beautiful.”

The link to register for the Aug. 5-6 oyster aquaculture workshop is HERE.