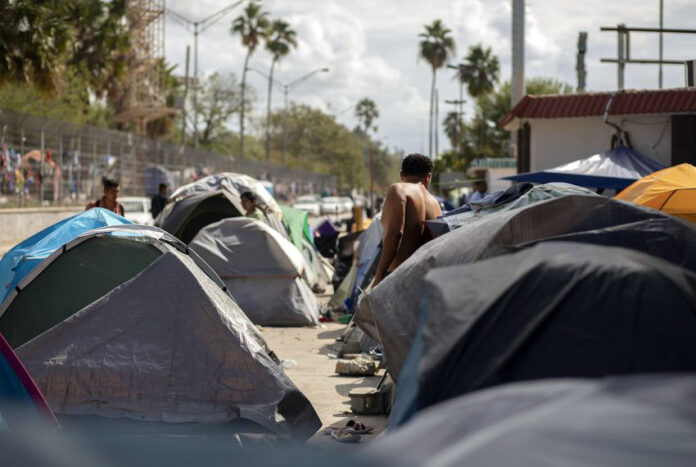 DALLAS – The small body of Rodrigo Castro was found on the bank of the Rio Grande, a short distance from the migrant camp in Matamoros. He was a leader among the Guatemalans seeking asylum. His memorial service was captured in many photos by those who admired him.

Days later, another body floated through the river. By the time the dead man was pulled out from his murky green grave, he had no identification. Camera phones cast their lens like voyeurs. But the video also broadcast the fact that asylum-seekers at the river bank wouldn’t be forgotten.

Hundreds of asylum-seekers are still holding on in a tent camp across the river from Brownsville. Poor health conditions and the threat of kidnappings and violence are with them always. They remain dispossessed of nearly everything but hope.

“All the fear just amplifies,” said Sister Norma Pimentel, the nun who runs Catholic Charities of the Rio Grande Valley and regularly visits the camp. “Their only hope was to be in the United States.”

The U.S. asylum system was already nearly choked of oxygen from a series of restrictions handed down by the Trump administration. Then the COVID-19 pandemic hit, causing more chaos and disrupting court processes. As many as a thousand people are living in the miserable, muddy camp along the banks of the river in Mexico, awaiting their chance at asylum in the U.S. Thousands more are living marginal lives in the urban neighborhoods of Matamoros.

Things have worsened in recent months, but many in the U.S. and Mexico are still finding ways to help the migrants through donations of money, food and supplies.

But anxiety runs rampant among the immigrant families stuck in Mexico while legally seeking refuge in the U.S.

“They have been there for over a year and they are desperate,” Pimentel said. Asylum and immigration policies must change so that the U.S. faces migration “in a more humane way. … We were a country that represents to the world the best values and we’re failing these people, totally, 100%.”

Newly arriving migrants find it hard to get housing because they’re often blocked by Mexican authorities, who have put fencing around the dirt camp of tents, Pimentel said.

As many as 4,000 migrants have found housing throughout Matamoros, she said.

The veteran camp dwellers now fly their country flags of Cuba, Honduras, El Salvador and Venezuela at one site in a splash of blue, red white and yellow color. That doesn’t make a Honduran there named Rolando feel any better.

A big fear is that the asylum-dwellers will be forgotten, he said. He didn’t want his full name known because of organized gangs that prey on the immigrants.

“We can’t put up with this place any longer,” Rolando said. “We haven’t had a tranquil night since we got here. We are waiting for a miracle here.”

Remarkably, as COVID-19 has rampaged around the globe, there have been only five cases of migrants who have tested positive at the camp. Global Response Management, operating from a big gray trailer bearing their red logo in the middle of the camp, now has a second clinic just outside the camp. Medical volunteers moved early in February to stem COVID-19 outbreaks with a prevention campaign that included masks, hand-washing stations and vitamin distribution. They even put in a mobile field hospital in the back of the camp.

The muted impact is probably due to the vitamin boost, outdoor living conditions, UV light, mask-wearing and early isolation when people appear to be ill, Leiner said.

“The severity of illness is very low,” she said. “We only had one person who needed oxygen support.”

The big contagion now is anxiety. That’s caused by the continuous crushing of asylum processes by the Trump administration, the pandemic, Hurricane Hanna, flooding, rodents and growing crime from the cartels of Northern Mexico, aid workers said.
Team Brownsville, a nonprofit, assists with apartment rent for a handful of the thousands who have found shelter in the city, said Andrea Rudnik, a retired teacher and co-founder of the group. They also purchase groceries, bottled water and other items for camp residents.

The camp swelled to about 2,500 people before the pandemic was officially declared. Now, its population is estimated at 650 to 1,000.

There have been persistent problems with the water filtration. Many camp residents don’t trust what flows from the tap, Rudnik said.

An infestation of rats, snakes and mosquitoes came in early August when storms from Hurricane Hanna caused river waters to rise over banks and flood into portions of the camp, she said. Then, Team Brownsville helped to pay for fumigation.

“The biggest challenge is knowing how to proceed from here,” Rudnik said.

Camp residents are grateful for the fresh tents that replace those that are tattered and the groceries they need to cook their own food, but their sights are set a few hundred feet north beyond the camp, past the red arches of the Gateway International Bridge – on Texas.

And Dallas-area groups like the nonprofit Rio Valley Relief Project continue to collect donations, or meet special needs like sending shower curtains for the bathing area of the camp or rubber shoes. When Cassie Stewart of the project is challenged to help those in the U.S., she just tells them: Need is need. “We are all deserving of life and all that has to offer,” Stewart said.

But Rudnik always pauses when she’s told this: What we really need are lawyers that will help us cross.

That’s a Herculean challenge because of ever-tightening U.S. policies in the already restrictive asylum processes in a backlogged court system.

Much of the legal combat takes place via video and at a two-story beige building where the Resource Center of Matamoros for the migrants is housed. It’s a short walk from the camp.

Here, lawyers and many others have labored for months on asylum and humanitarian entry cases. There’s a huge assortment of allies, from lawyers to mental health professionals that do assessments by video in distant cities.

U.S. lawyer Charlene D’Cruz coordinates much of the effort with a passion. She moved to Brownsville a year ago to work with the nonprofit Lawyers for Good Government. The multilingual attorney assists asylum-seekers file their own petitions. They’ve helped with about 1,600 cases since about September of last year. Most of the cases are ultimately filed with immigrants representing themselves, but some private attorneys take cases for full representation, too.

“We have taken due process and burned it to the ground,” she said of the many changes to the U.S. asylum system in the last three years. The biggest one keeps asylum-seekers outside the U.S. as they wait for their case to be called in border tents or courtrooms along the border. But the pandemic put a pause to even that.

Still, D’Cruz files appeals on the losses, saying everyone deserves their day in court. Her drive comes from her own immigrant roots in Mumbai, India.

“Most of the cases are going to be denied, people tell me,” D’Cruz said. “That is not my starting point. I want due process. I do believe in the Constitution and I’m an immigrant. One of the reasons I came here and stayed in this country is there is more (due) process in this country.”

She also credits some of her productivity to her staff, including an affable Honduran asylum-seeker who runs through the camp like a courier updating the desperate on their cases and the one-year window to apply for U.S. asylum.

The camp sprouted after the 2019 rollout of the Migrant Protection Protocols by the Trump administration. The program would end what a Trump administration official derided as “catch and release” for those seeking asylum because of persecution in their homelands.

Under the policy, first enacted in January 2019 along the Mexico-California border, most newly arriving asylum seekers could no longer await their court dates in the U.S. By the summer of last year, the program was in place in Matamoros and the camp grew to accommodate people waiting to be summoned by U.S. authorities for hearings at new tent courts in Brownsville.

Of 15,600 asylum cases that have been handled at the Brownsville bridge courts under the program, only 128 have been granted asylum or some sort of legal relief, according to the Syracuse University-based research center called Transactional Records Access Clearinghouse.

Many thousands of cases are on appeal.

Some of the immigrants who came north for asylum in the U.S. only to be told to wait in Mexico have now decided to try to resettle south of the border. The United Nations refugee agency says that Mexican asylum cases have increased sharply. Last year, there were about 70,000 who filed for asylum – up from 2,000 in 2014, said Sibylla Brodzinsky, a Mexico City based spokeswoman for the U.N. refugee agency.

“Asylum claims have grown exponentially,” said Brodzinsky. She added that the international organization supports the expanded efforts by Mexico.

The U.N. refugee agency has a permanent office in Monterrey, about two hours south of Matamoros. But they have no permanent office in Matamoros – a sore point among some who say the seasoned agency could be of profound assistance. At issue is the U.S. State Department’s assertion that the state of Tamaulipas, where Matamoros sits, is deserving of its designation as one of the most dangerous places on the planet. The U.S. ranks Syria at the same level.

Some in Matamoros have just moved to the interior of Mexico for jobs and safety.

Dallas attorney Fernando Dubove had a Matamoros client from Cuba who went to a Mexican coastal city and found a job. His client’s immigration hearings had been reset four times. At the border, his client was “vulnerable and easy to spot” by Mexican criminals who prey on the immigrants, Dubove said.

“Trump makes people wait in the most dangerous part of Mexico,” Dubove said.
Some believe that Rodrigo Castro died because of foul play – and not through a drowning.

Many describe him as a generous man who was always willing to help those in the despairing diaspora. When he died, a camp memorial featured candles and a spray of blue and white flowers with a sash in gold glitter that read “Rodrigo.”

In the days after his death around Aug. 18, six more bodies were pulled from the swollen Rio Grande, more aptly known on the Mexico side as the Rio Bravo.

Fresh rumors flew: Did they drown or was it foul play?