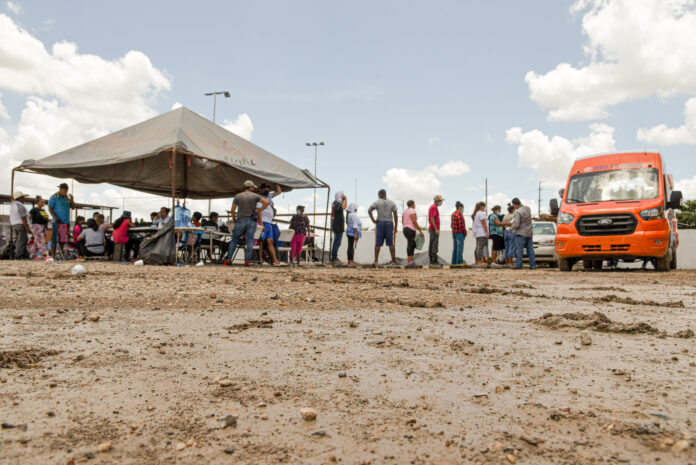 A shelter in Reynosa served with an eviction notice that threatened to demolish the building that houses 600 migrants by Sunday will remain operational after receiving temporary protection from a Mexican federal court.

Senda de Vida, the largest migrant shelter in Reynosa, received a notice of eviction from the city of Reynosa on Tuesday, informing them that they were in violation of a 1970 federal treaty with the U.S.

The notice sparked an outpouring of support from nongovernmental organizations, attorneys and engineers to address the possible displacement of hundreds of families, the legality of the decision, and possible solutions to the construction called into question.

On Thursday, attorneys, including Geovanni F. Barrios Moreno, filed an amparo request with the 8th district federal court in Reynosa. He contends the city does not have the authority to demolish the building.

On Friday, the court granted their request which serves as a protection against demolition and allows construction to continue.

Senda de Vida was built 17 years ago and slowly grew through piecemeal additions. Currently, a sizable addition is underway toward the west side of the property. When complete, the shelter is set to become the largest one operating in Tamaulipas.

The city’s letter authored to Senda de Vida’s director, Pastor Hector Silva, cited a concern by a Mexican federal agency that a portion of the building closest to the river was not properly compacted and could potentially fail.

Volunteer engineers from the U.S. visited Senda de Vida to consider a retaining wall as a possible solution, a safeguard to allow the river to flow unimpeded and protect the shelter from flooding.

Other unofficial solutions were floated, including a possible offer to provide the shelter a new property.

“We don’t want another property, because there’s construction and structure there supported by the same government,” Barrios said. Moving them to a new property would force the pastor to “start from zero.”

A hearing is scheduled to take place in about two weeks, when the court will determine whether the city can move forward with the eviction.

Barrios said he is ready to argue the city’s “arbitrary” decision targeting one building set up too close to the river but unevenly applying the same legal pressure to vacate on other structures similarly situated.