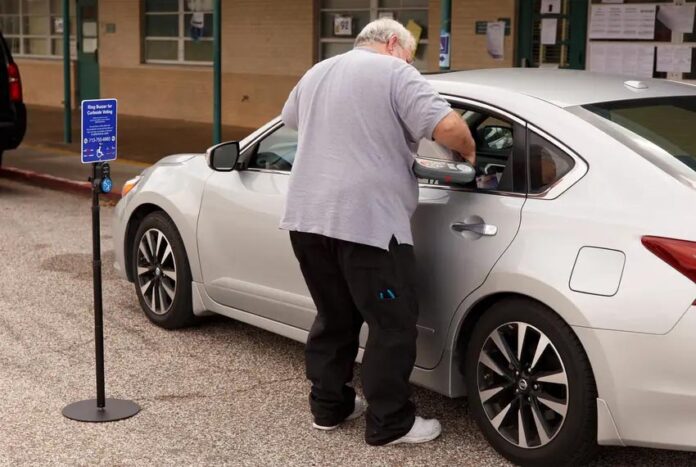 AUSTIN, Texas — In Tom Green County last election, the line of people waiting to cast a ballot from their vehicle sometimes wrapped around the block.

The farming and ranching hub in West Texas was one of a handful of places to roll out drive-through voting in the pandemic, drawing enthusiastic support from locals.

“It just happened to benefit some people who had kids with them or people who couldn’t stand for a long time,” said elections administrator Vona Hudson. “I can’t tell you how many people appreciated it and called and thanked us.”

Tom Green County couldn’t be more different than Harris, the large, liberal county whose novel voting initiatives triggered a months-long legislative fight over voting rights. Yet now, both must account for the new GOP-backed elections law that will have sweeping effects for all 254 counties.

The law bars counties from offering drive-through and 24-hour voting, like Houston’s Harris County did. Other, less high-profile provisions could cost taxpayers thousands, if not millions, of dollars. Not only must counties buy new equipment and come up with new election forms, they are now open to potentially costly lawsuits and fines, election officials said.

During the heavily charged debate over the sweeping election rewrite, which House Democrats stalled for weeks by fleeing the state, those issues rarely rose to the top. But they’re now front and center for election administrators preparing for the law to take effect on Dec. 2.

The most expensive change for Dallas County and others with at least 100,000 residents is likely the requirement to have video surveillance capable of live streaming every area with voted ballots. The state is not providing funding for the technology.

Then there’s new forms for curbside voting and added ID requirements for mail ballots, which means every county must reprint that paperwork.

Dallas County has yet to develop a cost estimate, according to Judge Clay Jenkins. Several others in North Texas are similarly calculating the potential price tag, which could hinge largely on guidance provided by the state.

The cost of some changes may be easily absorbed into larger county budgets, but could prove a big financial hit for smaller ones.

In Rockwall County, it will be an added expense to station a police officer at central count, which is now required under the law.

Not all the potential costs are easily quantified. A slew of new criminal and civil penalties could result in litigation expenses for counties because they must defend election workers accused of breaking the new rules.

Officials could also now be charged with a felony and face up to two years in jail for distributing an unsolicited vote-by-mail application — a steeper penalty than sending an actual ballot to someone who didn’t ask for one.

And election officials who break election rules could face civil penalties including termination and loss of their employment benefits.

Poll watchers, who are appointed by political parties and candidates to observe elections, now have expanded rights — they can sue if they believe they were prevented from doing their job.

Counties that don’t properly maintain their voter registration lists can now be hit with $1,000 daily fines.

With Tuesday’s bill signing by Gov. Greg Abbott, Texas joins more than a dozen states that have passed Republican-backed voting changes since the 2020 election.

Much of the next few months will focus on training to ensure election workers understand the new rules, said Collin County elections administrator Bruce Sherbet.

“We’re going to be very careful how some of things are done because there are criminal penalties assigned, even if it’s mistakenly done,” he said. “We fully intend to follow exactly what the law permits to be done and not do something that’s outside of it.”

It remains to be seen to what extent the new rules will be enforced.

Attorney General Ken Paxton, a Republican and proponent of the new law, has made pursuing voter fraud a priority. While his office has largely focused on voters — resolving 16 cases last year in a state of more than 15.7 million registered voters — state attorneys recently pursued a Harris County election official accused of obstructing a poll watcher in the 2020 election. A grand jury ultimately declined to indict.

Some election officials fear the new penalties could scare off people who work elections, but others say counties that simply follow the rules will have no trouble.

The bans on 24-hour and drive-through voting, in addition to the prohibition on counties distributing unsolicited vote-by-mail applications, will have little effect on North Texas, where few counties tried them.

Harris County, the state’s largest and among the most diverse in the state, had planned to continue offering those early voting initiatives, which together drew more than 127,000 people last November.

“These methods of voting are successful, they are safe, they help voters who have been historically disenfranchised in Texas,” said elections administrator Isabel Longoria. “And now ostensibly it feels like we are being penalized for doing the things that help voters.”

Tom Green County, by contrast, was unsure whether it would repeat drive-through voting. It was a major logistical undertaking, Hudson said, between managing the voting equipment, fluctuating weather conditions and heavy traffic.

“It wasn’t really my intent to do it again,” Hudson said. “I just thought it was an opportunity we could grasp and it worked out great for that election.”