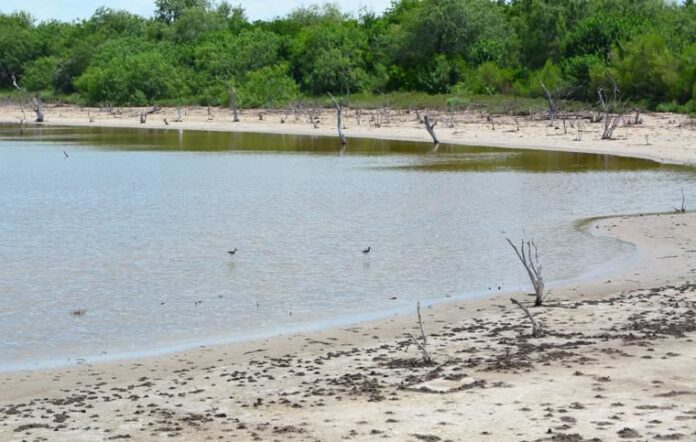 Two months after torrential rains flooded many areas in the Rio Grande Valley, the U.S. Drought Monitor index has placed Cameron, Hidalgo and western Willacy counties back on the drought map as “abnormally dry.”

Before those rains, in early June, the drought index listed northern Cameron and 90 percent of Willacy County as being in severe drought, with southern Cameron being in moderate drought.

The problem is those heavy rains have been followed by very little precipitation since — 4.08 inches in Harlingen, 4.77 inches in Brownsville, 4.37 inches in McAllen — over the past 60 days.

“For just a few weeks there it got nice and green, but by mid to late July it’s pretty much as brown as it was before the day before the flood,” Barry Goldsmith, a meteorologist with the National Weather Service in Brownsville, said yesterday. “We are in abnormally dry conditions and if we don’t see any rain soon we very well could be going into what is called ‘moderate drought conditions’ for a good part of the Valley.”

Part of the reason the Valley dried out so quickly after that heavy soaking is because it has been so hot.

Between June 1 and Aug. 26, Brownsville has had its highest mean temperature of all-time at 87.5 degrees. Harlingen and McAllen saw their fourth-highest mean high temperatures at 86.9 and 89.9 degrees, respectively.

Combining heat with high wind lowers humidity by 5 to 10 percent, and that has quickly evaporated much or most of the surface water left by the heavy rains in late June.

As always when talking about hot summer weather in the Valley, sooner or later the conversation comes around to “La Canicula,” Spanish for the “dog star” known as Sirius which rises in the sky in summer.

La Canicula is a high-pressure ridge which parks itself over West Texas and New Mexico and northern Mexico from about the start of July to mid-August.

“That’s where the center of the atmospheric ridge is and flow to the east of that tends to downslope the mountains and dry out at all levels,” Goldsmith said. “That’s why it makes it hard to rain.”

But by around mid-August, give or take a few days or even weeks in some years, La Canicula’s bite on the Valley’s weather starts to weaken and another persistent high-pressure feature, the Bermuda ridge, takes over as La Canicula fades.

“When that happens, if you get the ridge peaking in the middle Atlantic, the Bermuda area, and taking over the flow, what happens here is we don’t have the strength of Canicula compared to the strength of the mid-Atlantic ridge or they’re equal,” Goldsmith said. “Now you have the opportunity to open the door, open the gate if you will, to deeper tropical moisture from the Bay of Campeche, the southwestern gulf and especially the Caribbean.”

The open gate means September is historically the Valley’s wettest month of the year. Brownsville averages 5.91 inches of rain that month, Harlingen averages 5.28 and McAllen 4.49 inches.

Problem is, if conditions don’t open that window of rainy opportunity in September, the Valley has a hard time making up the precipitation shortfall the rest of the year.

“So what are we looking at now? This is where it gets interesting,” Goldsmith said. “The Bermuda ridge indeed has expanded eastward and it’s tending to be a little more dominant on the east coast than it would be over the Southwest.”

“The southern periphery of the ridge is tending to favor places like Veracruz and southern Tamaulipas and the Yucatan Peninsula and even parts of northern Central America,” he said. “Which means that deep moisture that would flow from the western tropical Atlantic through the Caribbean and then on into the southeastern and southern gulf and Bay of Campeche would just keep on trucking from east to west rather than southeast to northwest.”

That means the rain window for the Valley doesn’t look like it will be open very far, which usually means we don’t hit our average precipitation for the month.

“If that’s how September ends, then if that trend continues, that’s how we’ll see our drought develop even more,” Goldsmith said.