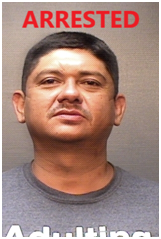 A $1 million bond has been set against a 39-year-old Brownsville man accused in the brutal attack of his girlfriend.

Authorities said the Sept. 15 attack was so severe that the victim, a 49-year-old woman, ended up hospitalized for one week.

Amado Martinez Jr. was arrested Monday by the U.S. Marshals Fugitive Task Force during a traffic stop in Brownsville.

Authorities had been looking for Martinez for days, said Investigator Martin Sandoval, spokesman for the Brownsville Police Department.

A warrant for Martinez’s arrest charging him with aggravated assault causing bodily injury family violence had been issued Sept. 16. It’s unknown where Martinez’s whereabouts were prior to his arrest.

“ He’s not really telling us anything,” Sandoval said. “It just so happened that somebody located him, saw him leaving and they did a traffic stop and arrested him and took him in.”

The attack on the woman happened at the couple’s La Brisas apartment at 2426 Barnard Road. When police arrived at the location, they found the woman lying down in the basketball court.

“ They made contact with (her) and realized she had been severely beaten,” Sandoval said.

The woman told police that her boyfriend had severely beaten her and she didn’t know if he was still inside the apartment, Sandoval said.

“ When officers went into the apartment they were able to locate the crime scene that was mostly concentrated in the bedroom,” Sandoval said. “They found blood and things were thrown around like there were signs of a struggle.”

The woman had swollen eyes, a fractured cheek bone and other lacerations to her body.

Sandoval said the woman either crawled or managed some other way to make it to the basketball court where she was found.

The woman told police she had let her boyfriend inside her apartment and that the assault occurred shortly after a conversation between the two, Sandoval said.

According to police, the investigation has been turned over to the Cameron County District Attorney’s Office.

More than 200 new homes to be built in Edinburg