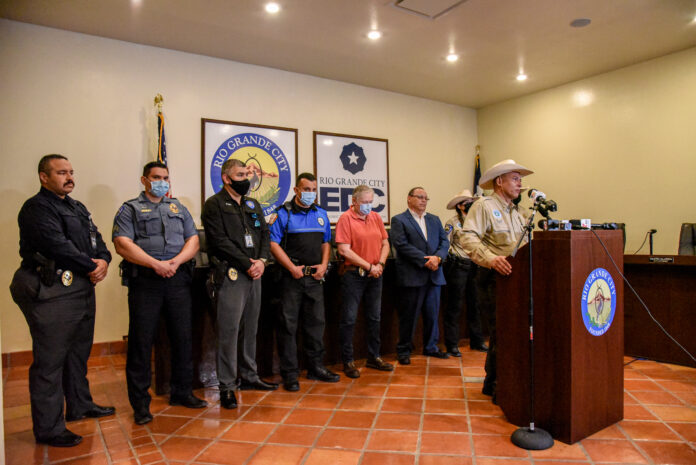 After 17 years, Starr County authorities cracked a murder case after other investigators failed to act on significant evidence since 2004, officials said at a news conference in Rio Grande City on Monday.

The body of Dario Salmon, 45, was discovered in his front yard of his Rio Grande City home on Jan. 21, 2001. An autopsy confirmed he was stabbed to death, but his case remained unsolved after the “investigation ended with no solid suspects or leads,” the affidavit read by Commander Robert Caples of the Starr County Special Crimes Unit stated.

That all changed this year after authorities made discoveries that led to a lead that had not previously been followed.

Caples and his team, who are also employed by the Rio Grande City Police Department and Rio Grande City CISD, inherited the case in January. Their investigation led them to look closer at Betty Guerra, a woman suspected to have been romantically involved with Salmon at the time, and Joe Bazan, a man also romantically linked to Guerra in an “on-off” relationship.

Both Guerra and Bazan died years ago. Bazan was shot and burned in his car in 2005, and Guerra was violently abducted from her home and reported missing in 2012, Caples said.

Through interviews with surviving relatives, investigators learned Bazan and Guerra were stashing drugs in Guerra’s house. Bazan was a suspected lieutenant working for the Texas Mexican Mafia, a prison gang. He worked alongside another man, Luis Carlos Mares, then 27-years-old, who held the rank beneath Bazan as a sergeant in the gang.

Evidence gathered from the scene was sent to the Texas Department of Public Safety Crime Lab in McAllen and later to the lab in Corpus Christi. Caples made a discovery among the old case files from the Texas DPS Crime Lab.

In March, Caples found a report dated Jan. 20, 2004. DNA collected from a cigarette butt found at the crime scene was matched with DNA kept in a federal database called the Combined DNA Index System, also known as CODIS.

Days after the discovery, a search warrant was issued for the DNA collection of Bazan’s former sergeant, Mares, who is currently in prison for another crime. Investigators visited Mares at the McConnell Unit of the Texas Department of Corrections in Beeville, Texas on March 25 where they collected DNA from Mares.

Before the report confirmed his DNA matched with that found at the crime scene on July 14, Mares talked to investigators on camera about the murder when they visited him in March.

Mares said Bazan believed Salmon was responsible for Guerra’s drug addiction to crack. The men discussed the murder the night before it happened at Bazan’s home where a third, unidentified man was part of the conversation.

“If you want to do it, let’s go do it right now,” Mares told Bazan, referring to the murder.

Due to their ranking in the gang, Mares would have to go with Bazan, because Bazan outranked him.

All three men drove over to the victim’s neighborhood in Mares’ car, a green Pontiac Grand Am. The men dropped off Bazan two blocks away from the victim’s home in an alley. A bloodied Bazan was picked up from the same location sometime later.

The men cleaned up the backseat stained with the blood on Bazan’s clothes and burned the clothing, too.

Mares’ account shared with investigators included allegations that a previous district attorney in Starr County, Heriberto Silva, did not act on his statement provided years ago.

“Defendant Mares insisted in his statement that he had provided the details of Dario Salmon’s murder to 229th District Attorney in 2004 who had traveled to Laredo to interview him in person while he was in custody for a different offense,” the affidavit read. “Defendant Mares states that the information was then leaked to the Texas Mexican Mafia which had very strong ties to the District Attorney, other elected officials, and investigators.”

An investigative team was also involved with the case at the time.

“We know that at that time there was a violent crime task force that had taken over this case, and the information that Mares provided was that they did not do anything about the CODIS hit in 2004,” Caples said. “We know that that unit was disbanded sometime after that.”

Caples and his unit were able to corroborate some of Mares’ testimony with people who were members of that violent crimes unit, the district attorney’s office in 2004 and other law enforcement officers.

“As to whether anyone did any wrongdoing we don’t know yet. And if they had, at this time, the statute of limitations would be over,” Caples said.

The Starr County Special Crimes Unit is continuing to investigate other cold cases.

“If the people who want to see this unit gone would just leave us the hell alone, we might be able to solve those cases. In fact, we are very optimistic that we will solve those cases,” Caples said at the end of the news conference.