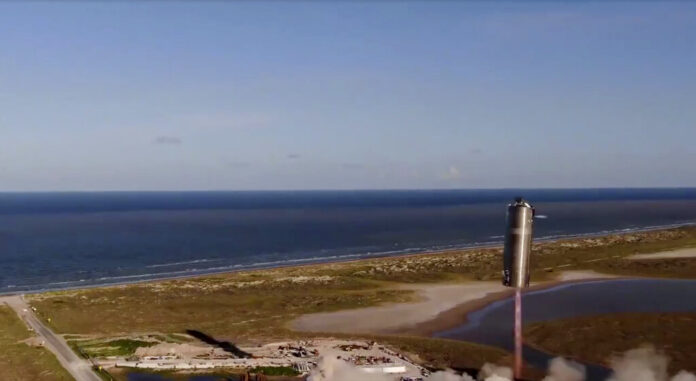 Tens of thousands of pairs of eyes were fixed to computer screens around the globe the last several weeks, staring at live-stream images of a tall, shiny cylinder resembling a grain silo, just off S.H. 4 a stone’s throw from the waves of Boca Chica Beach about 22 miles east of Brownsville.

First they watched for the long-awaited static-fire test of the SpaceX Starship SN5’s Raptor engine, a precondition for the inaugural hop of the SN5 prototype itself. After weeks of delays and multiple last-minute aborts, the Raptor finally roared to life at 3:02 p.m. on July 30 for a “full duration” test lasting five or six seconds.

The international audience was back again the evening of Aug. 3, hoping to see SN5 blast off, rise to 150 meters (492 feet) as planned, and then alight on a nearby landing pad. The attempt was scrubbed just before 8 p.m., after the 10-minute siren was sounded to warn Boca Chica Village residents that a launch was imminent. SpaceX founder and CEO Elon Musk tweeted soon after that a “Raptor turbopump spin start valve didn’t open, triggering an automatic abort. We’ll figure out why & retry tomorrow.”

The worldwide watch party began again the morning of Aug. 4, with the siren sounding around 11:25 a.m. and another aborted attempt. Musk provided no information as to the cause, but that evening the pad was cleared of personnel and vehicles once again and liquid oxygen vapor soon began venting — again — from the tank farm near the launch stand and then in increasing quantities from SN5 itself.

The siren sounded at approximately 6:45 p.m. At 6:57 p.m. the engine ignited in a burst of orange fire, the powerful thrust creating a giant dust plume all around the gleaming SN5. A SpaceX drone video showed the stainless-steel-clad vehicle rising to 150 meters and hovering at altitude for a few seconds atop a diamond-crossed, blue-and-white column of flame — the direction of thrust gimballing constantly to steer and maintain attitude — before setting down again.

When the dust had cleared the machine was upright if leaning slightly. It was the first flight of a full-size Starship prototype, and the first launch at Boca Chica since the diminutive Starhopper prototype flew to 150 meters last August.

In the last seconds of Tuesday’s flight the SpaceX video switched to a camera within the skirt of the SN5, revealing a flaming blast of thrust as the craft touched down, a control-room voice-over announcing “full duration” as the engine is shut down.

“Mars is looking real,” Musk tweeted about half an hour after the flight.

His intention is to develop Starship as the reusable spacecraft that will carry humans to Mars — and not just to visit. Musk said human settlements on Mars are a way to ensure the long-term survival of the species. He’s in a hurry, which is understandable considering the challenges in developing the technology. Since concentrating the Starship program on Boca Chica, the company’s engineering and build teams have been going full bore on prototype construction.

Although SN5 is fitted with one Raptor engine, subsequent prototypes will be fitted with multiple engines. The design for Starship ultimately calls for the spacecraft to be powered by six engines, while the Super Heavy reusable booster that would propel it into orbit would have 31 engines. Preparations are underway to build the Super Heavy at Boca Chica.

The Federal Aviation Administration on May 28 (the day before SN4 exploded on the launch stand) granted SpaceX a two-year license for suborbital Starship testing at Boca Chica. Orbital testing will also have to take place before a Starship ever carries a single passenger, though nobody knows how soon that will be.

Meanwhile, several environmental groups have co-signed a letter to the FAA requesting a more rigorous environmental review of SpaceX’s Boca Chica operations than the Environmental Assessment the company currently is conducting.

The groups argue that the more comprehensive Environmental Impact Statement review is necessary because of the magnitude of the effect on people and the environment as a result of SpaceX’s decision to develop Starship at the site, rather than its originally stated goal of building a commercial spaceport at Boca Chica hosting less powerful rockets and no more than 12 launches a year.