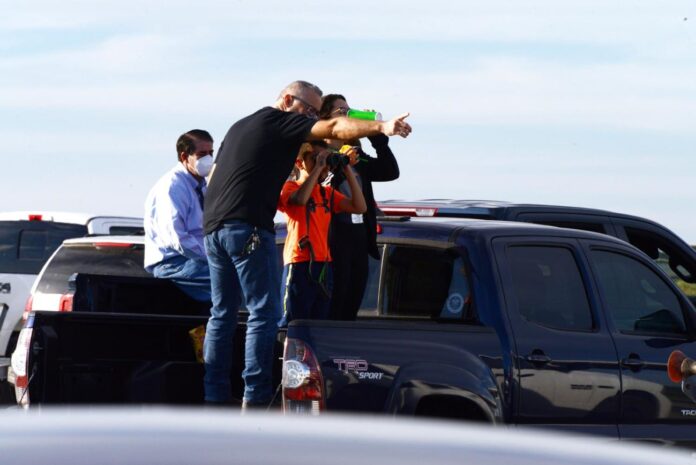 Such was the case at 4:35 p.m. Tuesday outside Brownsville, when SpaceX’s planned launch of the SN8 Starship prototype at Boca Chica Beach was aborted literally at the last second.

On a YouTube live feed that came on line a few minutes before the planned launch, a voice belonging to Boca Chica mission control can be heard uttering “abort” after the rocketed belched plenty of white vapor but no fire with 1 3/10 seconds remaining on the countdown clock.

A few minutes later, SpaceX posted “Raptor abort, standing down for the day” on the feed. At 4:43 p.m., SpaceX tweeted: “Raptor auto-abort at T-1 second.”

Raptor is the name of the company’s liquid oxygen and liquid methane powered engine, designed and built in house. SN8 has three of them, compared to one in each of the previous prototypes that have flown at Boca Chica: Starhopper in August 2019, SN5 on Aug. 4 of this year, and SN6 a month later on Sept. 3. SN stands for “serial number.”

Those successful flights were to 500 feet. With SN8, SpaceX is attempting a flight to more than 40,000 feet followed by an unpowered, skydiver-like descent, then a throttle-up on the engines and a swing of the tail toward Earth for what’s hoped will be a gentle touchdown. The test is designed to see how the vehicles three engines perform and gauge the “overall aerodynamic entry capabilities of the vehicle, including its body flaps,” plus transitioning propellant from one tank to another.

“SN8 will also attempt to perform a landing flip maneuver, which would be a first for a vehicle of this size,” according to SpaceX. “With a test such as this, success is not measured by completion of specific objectives but rather how much we can learn as a whole, which will inform and improve the probability of success in the future as SpaceX rapidly advances development of Starship.”

Elon Musk, SpaceX founder and CEO, recently gave the SN8 test a one-in-three chance of success. The company may try again today, or later in the week. Temporary Flight Restrictions for aircraft and drones issued by the Federal Aviation Administration for Boca Chica remain in effect through Dec. 10. Tuesday evening after the scrubbed launch, Cameron County Judge Eddie Trevino Jr. ordered Boca Chica Beach and S.H. 4 closed from F.M. 1419 to the beach on Dec. 10-11 from 7 a.m. to 5:30 p.m. both days for space flight activities.

The SpaceX live feed for the eventual SN8 launch can be found here: