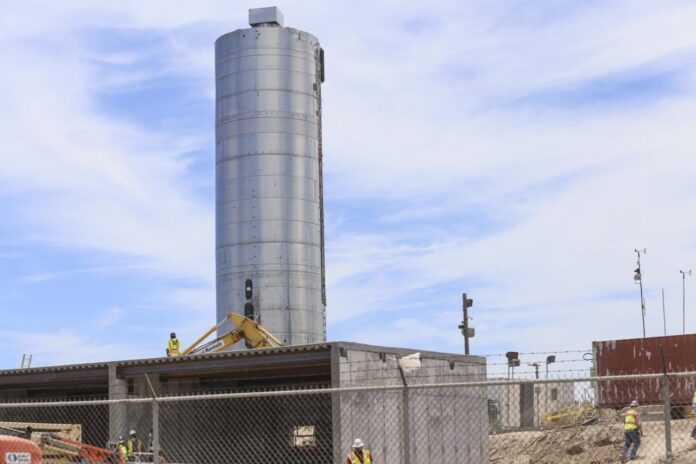 SpaceX may conduct its first high-altitude test flight from the company’s Boca Chica site this week, according to SpaceX founder and CEO Elon Musk.

Musk tweeted on Nov. 29 that an attempted launch and landing of the three-engine SN8 Starship prototype would take place “no earlier than Wednesday.” SpaceX’s goal is to launch the test vehicle to an altitude of about 50,000 feet before cutting the engines and allowing the ship to descend in a “belly-flop” attitude maintained by moveable body fins, then reigniting the engines and maneuvering the craft back to vertical just before touchdown. Typical cruising altitude for a commercial jetliner is 35,000 feet.

As Musk put it in a Nov. 24 tweet: “Goals are to test 3 engine ascent, body flaps, transition from main to header (propellant) tanks & landing flip.”

He gave the test flight about a one-in-three chance of success, noting that “lots of things have to go right.” If things don’t go as planned, Starship prototypes SN9 and SN10 are waiting in the wings at SpaceX’s Boca Chica production complex, Musk tweeted. SN stands for “serial number.”

As of Monday SN8 had already undergone four static-fire tests, in which the engines are ignited briefly with the Starship attached to the ground. The third test, conducted on Nov. 12, almost ended in disaster for the prototype when a flame-deflecting coating over the concrete of the launch pad shattered, sending shards into the bay where the vehicles three Raptor engines are mounted, according to Musk.

The incident resulted in loss of control of the rocket, resulting in a “bad shutdown of Raptor,” though the vehicle was saved from overpressurization and fatal rupture by a “burst disk” designed to relieve excessively high propellant pressure, he tweeted on Nov. 13.

“Yay! Looks like a burst disk, which is better than ‘the front fell off’ pop,” Musk tweeted.

An engine had to be swapped, though, and fifth static-fire test scheduled for Monday was canceled, though it wasn’t clear as of press time Monday whether that would affect an SN8 launch this week. No Temporary Flight Restrictions from the Federal Aviation Administration signaling a pending high-altitude launch from Boca Chica had been issued as of Monday.

However, Cameron County Judge Eddie Trevino Jr. on Monday afternoon ordered Boca Chica Beach and S.H. 4 from FM 1419 (Oklahoma Avenue) to the beach closed from 8 a.m. to 5 p.m. Dec. 3-4 for “test launch activities,” with Dec. 3 serving as the primary date and Dec. 4 the alternative date. This week’s flight, if it happens, will be the first by a full-size Starship prototype assembled to its full height of 165 feet.