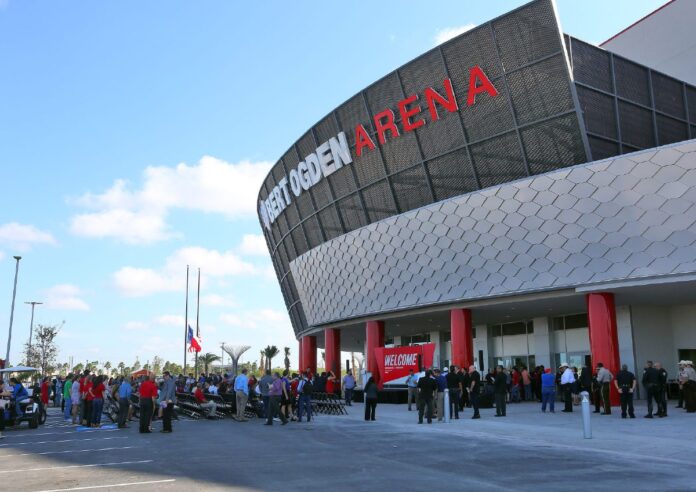 Their words came set against a backdrop that read “Welcome” and “#GameChanger.” The arena’s specifications — detailed in a pamphlet distributed at the grand opening with “Changing the game in South Texas” printed on the cover — live up to the popular tag line. The venue boasts 9,324 seats, 15 luxury suites, a 44- by 19-foot LED scoreboard, 78 points of sale, three restaurants and two concession partners all filling the 219,000-square-foot venue, a list of marks unmatched by any arena in the Rio Grande Valley’s history.

“This is definitely a game-changer,” Molina said. “Bert Ogden Arena launches a new era in sports and entertainment. Not only here in Edinburg, but in the entire Rio Grande Valley.”

Now, the challenge for those operating the facility is to take game-changer from a noun to a verb. All seven of the acts booked at the venue — a group that leads with a performance by Luis Miguel today — have previously played at Hidalgo’s State Farm Arena. Currently slated to appear at Bert Ogden Arena are George Lopez, WWE Live and four musical artists: Alejandro Fernandez, J Balvin, Romeo Santos and Marc Anthony.

“Any community, any arena, would be thrilled to have the lineup that we have,” Solis said. “So we’re looking forward to more Latin acts, but we’re also looking forward to getting some big-time country in here, and we’re in talks with that. We’re looking at some good-size rock acts, too, next year. We’re going to have a variety of entertainment for the community.”

A grand opening with an act the likes of which the Valley has never seen before sounds great in theory but can be more difficult to achieve in practice.

In many cases, top acts can only be lured once a venue has proven its credibility.

“I think we’re going to get them,” Molina said. “It’s just starting. It has to establish a reputation, too. You’re not going to say, ‘I’ve got this arena,’ and you’re going to get this big name that you would get in Los Angeles. Once it gets established, I’ve seen names at a neighboring arena that I thought would never come to South Texas. They eventually made their way down here. So I know the same thing is eventually going to happen here.”

Solis said the arena is on the right path, with an experienced management team building off of established reputations with agents and promoters.

Solis previously filled a similar role at State Farm Arena, and he said looking at his booking process there versus at Bert Ogden Arena is like comparing apples to oranges due to the new venue’s polish and seating capacity.

“For us, it’s just a matter of making sure we find the right acts that are going to fit in our market,” Solis said. “I’m really optimistic at 2019 and 2020. Still kind of putting some stuff on the calendar for 2019. It’ll be a real good year for us.”

Arena business tends to be cyclical in nature, Solis said, with the bigger shows running October through May. The challenges of a summer opening were also compounded by the lack of a firm completion date. As recently as the second week of July, when WWE Live was announced as the arena’s first sporting event, Solis left the door open to an act other than Luis Miguel opening the arena.

“There were opportunities there, no question about that. We had to pass on it. We just weren’t going to be ready,” Solis said. “At the same time, if you get something that passes you by, it’ll catch you back again. If they’re interested in your market, you’ll catch it back again.”

The early response from the Valley community has been another promising sign. Solis estimated that about 5,000 people attended Sunday’s open house event, and Vackar said he was astounded by the enthusiasm he saw from the visitors.

Janet Vackar, Robert’s wife and the daughter of Bert Ogden, stood in the arena’s main entrance for about four hours greeting visitors Sunday.

“They couldn’t have been more thrilled, and I was honored to shake their hands and take pictures,” Janet Vackar said. “They were so grateful that we had this for them and built it for the Valley.”

A positive early response is a critical sign, as Solis said the arena’s offerings can grow only with the community’s support.

“A lot of times people tell me, ‘You should bring ‘x’ act here or this type of genre music here,’” Solis said. “My comment is always the same: ‘Well, come support what we’re currently doing. That just helps to bring more shows down here.’”

Alonzo Cantu, who funded a large portion of the venue’s construction costs through a public-private partnership with the city of Edinburg, said a strong turnout is critical to helping the arena reach its peak.

“We’re going to try and hopefully do well and build credibility with artists that we can actually fill this place,” Cantu said. “We need the support of people buying tickets. I don’t decide who comes. The market decides who comes, and the promoters won’t come if the market is not here and it’s not supported.”

Speaking from the podium at Monday’s ribbon-cutting, Molina said Bert Ogden Arena puts the Valley “head and shoulders above the region.” He said he knows the feeling of having to travel to San Antonio or Corpus Christi to watch a big event and sees the potential for Bert Ogden Arena to bring those same attractions to his own city.

“Now, I’m going to call on my community to make this venue a success,” Molina told the crowd. “Fill these seats during those sporting events and during those concerts. We can’t do it alone. We need your support. You don’t have to travel out of town anymore for big events. We’re going to bring them home to you.”

And for anyone claiming the acts are stale, Robert Vackar points to ticket sales. Though bigger shows new to the region may be in the pipeline, the current crop has sparked a great deal of interest.

“The ones that have been announced and people have seen before, my gosh the tickets for the first concert on Friday night sold out in

30 minutes. So everybody is just clamoring for tickets,” Vackar said. “Some of them have been seen, and hopefully we’ll see them many more times. Because if we don’t, that’s a lot of people who won’t have that opportunity made available to them. I think it’s just starting, so we’ll just rev the engines and keep moving.”

The Mexican singer and icon is in the midst of his ¡México Por Siempre! Tour.

TICKETS: Tickets start at $25 via AXS, available through BertOgdenArena.com

TICKETS: Tickets start at $59 via AXS, available through BertOgdenArena.com

Two Mexican acts combine on the Rompiendo Fronteras Tour. Fernandez has sold more than 30 million albums worldwide covering an array of genres from mariachi to pop.

TICKETS: Tickets start at $49.95 via AXS, available through BertOgdenArena.com

Making a stop on his Vibras Tour, the Colombian reggaeton singer is most known for hits “I Like It” and “Mi Gente.”

TICKETS: Tickets start at $39.50 via AXS, available through BertOgdenArena.com

The award-winning and multiplatinum artist will be coming to South Texas in support of his latest album, 2017’s smash hit “Golden.”

TICKETS: Tickets start at $34.50 via AXS, available through BertOgdenArena.com

The Mexican-American comedian and actor who starred in his eponymous self-produced ABC sitcom and hosted his own late-night TV show brings his stand-up routine to Edinburg.

The NBA G League affiliate of the Houston Rockets will open their 12th season and first in Edinburg with a matchup against the Memphis Hustle — the first of 24 Vipers home games at Bert Ogden Arena.

TICKETS: Tickets start at $66 via AXS, available through BertOgdenArena.com