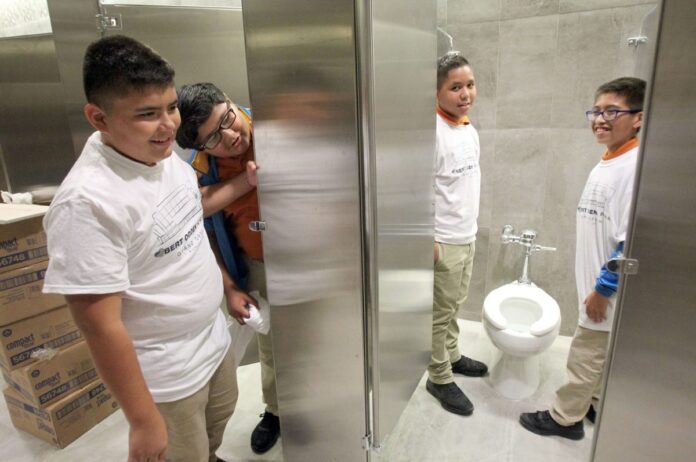 The venue bustles with activities, beyond the energized youth reacting to the music.

Crews install chairs around the 9,000-seat arena as others work on plastic guards for the edges of glass and some on cable railing.

And after a group selfie, the kids are dismissed to different restrooms, in various conditions. Some bathrooms had water on the floor or building materials on the counters.

Staff coordinated on two-way radios so students could time their toilet flushes together for a “water pressure activity” dubbed the Royal Flush, according to a news release. And at the command, students flushed the toilets.

The commodes on the south side of the venue didn’t flush. But officials with the arena said they were not fazed by the results.

While students toured the facility after the test, the team began troubleshooting the mishap. They quickly realized that the south-side “valves were off at the time of testing,” said Bert Ogden Arena CEO Marc Solis.

“By simulating a live-event load test in this controlled environment, we can determine which areas need correcting,” he said.

There’s still more work that needs to be done. Officials said they plan to use this weekend’s events, Saturday’s private preview and Sunday’s open house for the public, as a “soft opening” to continue to address additional snags.

Luis Miguel’s Aug. 31 concert will represent Solis’ fourth venue opening, and each was a work in progress, he said. He compared launching an arena to moving into a newly built home: one prefers it 100 perfect complete, but realistically there are a number of non-essential items to iron out.

“Once we open, we’ll be working on some punch-list items, just like any facility this size would be doing,” he said.

At the same time as this kids’ event Tuesday morning, the arena sales teams received training while the point of sales systems were installed. Men worked on completing the outdoor marquee. Workers cleaned grout on the floors.

And, Edinburg inspectors walked the space.

An Aug. 10 Monitor article addressed unsubstantiated safety and licensing issues for the arena leveled by local blog Valley Delta. This has been dismissed as “misinformation.”

To the city, Cantu Construction and the arena management, “the safety of the patrons is the most important thing for all of us,” Solis said. “Fortunately, we’re at a point where all the life-safety issues have been addressed.

“We are continuing to make necessary tweaks to all systems prior to our first official event.”