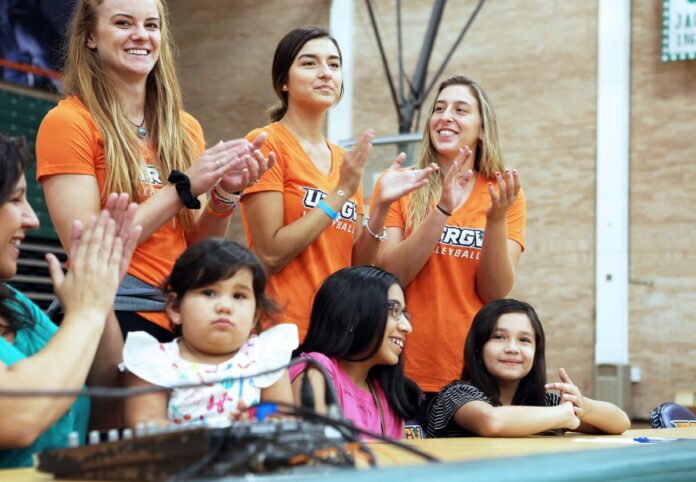 EDINBURG — After getting to know her new UTRGV volleyball teammates, 7-year-old Madisen Flores sat on the hardwood floor of the UTRGV Fieldhouse and had her hair braided by Vaqueros sophomore Jackie Kingsbury.

Braiding each other’s hair is one of UTRGV’s regular pregame traditions, and the Vaqueros were quick to get Madisen up to speed. A pediatric cancer survivor from San Juan, Madisen on Monday became part of the UTRGV volleyball program through a ceremonial signing set up with help from the Friends of Jaclyn Foundation.

“It was amazing,” Madisen said. “I loved it so much. It was a great experience.”

Madisen signed in front of the half-dozen UTRGV players who were on hand for summer classes, plus other department coaches and staff. The players who weren’t on campus sent messages that were shown on the UTRGV Fieldhouse video board. Vaqueros offered greetings from places like Brazil and the Czech Republic, and junior Ragni Steen Knudsen even gave Madisen a look at the scenic waterfront from her home in Norway.

“I’m really grateful to have met these girls,” Kingsbury, a Los Fresnos native, said of Madisen and her 12-year-old sister, Alysen. “They make me have a different outlook on life. You don’t realize how special the role we play in the community is until you meet young girls like this, and they look at you like you’re some superhero. Being in this situation, it’s humbling.”

Madisen signed at the scorer’s table in front of all the cameras, then she and Alysen were presented with UTRGV volleyball jerseys, which they promptly put on. The girls posed for photos with their new teammates, all the while talking about their favorite foods and music or the many different languages the UTRGV players can speak.

“Volleyball is a small part of what we do,” UTRGV freshman and McAllen High grad Carter Helmcamp said. “The whole point of being in a high-level team is being able to do more than just the game. Giving back like this, it just makes it all worth it and completes everything.”

Banesa Flores — the girls’ mother and a UTRGV alumni — said Madisen was diagnosed with acute lymphocytic leukemia on Nov. 5, 2015, after the family sought treatment for a fever that wouldn’t go away.

Madisen underwent chemotherapy for two and a half years, enduring many days on which she would throw up or feel extremely weak. She was finally pronounced cancer-free in January.

“That was a very tough time, but throughout, she was amazing,” Banesa said. “She was just so strong and so brave in all of her hospital stays and her times at the clinic and in chemo. We were just amazed at how strong she was. For so much strength to be in that little girl, we’re so proud of her.”

Madisen said she is looking forward to attending her first UTRGV volleyball game and has been practicing the sport with a beach ball at the family’s home.

Alysen said she was glad to be on hand Monday to help keep her sister from tensing up or becoming shy around her new friends.

“I love it when she’s happy,” Alysen said. “When she’s happy, I’m happy. So it felt great. … She’s always been super brave, so we’re always loving her and protecting her.”

UTRGV volleyball coach Todd Lowery said he heard about Friends of Jaclyn, a national foundation that has paired more than 750 children with athletics teams, when the organization was featured on HBO’s “Real Sports with Bryant Gumble.” Lowery was contacted by Friends of Jaclyn in May and said he jumped at the opportunity to get involved. Going forward, Lowery said he’d like to see Madisen and Alysen watch matches from the bench, attend team dinners or be a part of the players’ group messages.

“I think our girls forget what role models they really are sometimes,” Lowery said. “Stuff like this brings it back to them and is going to allow them to take that to the next level. That’s what we want. We want to not just win volleyball games here. It’s about developing that group of young athletes into great community members and people.”