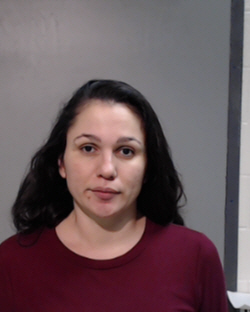 A woman accused of vandalizing religious sites in Hidalgo County interrupted her arraignment in McAllen with incoherent outbursts Wednesday afternoon.

McAllen police arrested Erica Yme Garza, 38, on Tuesday in connection with the vandalizing of the Temple Emanuel synagogue in McAllen.

At all three houses of worship, references to the occult and anti-Semitism were found spray-painted — with similar misspellings and odd variations — Tuesday morning.

In McAllen, charges and a bond have not yet been set for Garza as the arraignment hearing has been delayed.

Garza, who appeared via a video monitor, was removed from the proceeding after shouting at the judge, who was attempting to explain the arraignment process to the suspect.

Gonzalez said Garza is also expected to be arraigned in San Juan in the basilica case later today.

Here are some photos of the vandalism at all three religious sites.