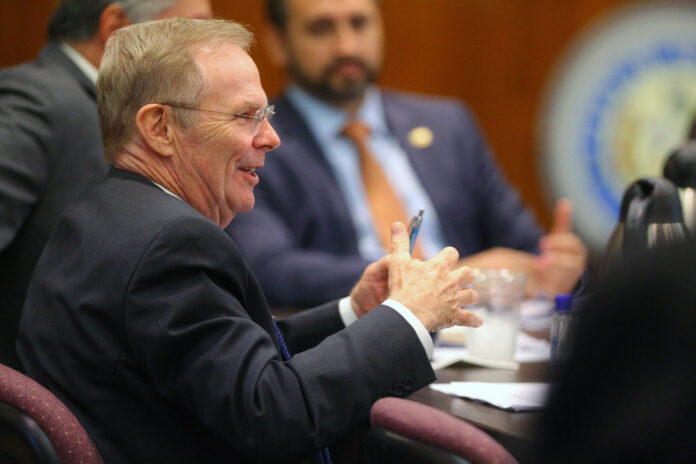 McALLEN — After almost 43 years of public service to the city, the mayor announced Monday he is not seeking reelection once his term ends in May 2021.

McAllen Mayor Jim Darling made the announcement during a city commission meeting Monday evening and then again via tweet Tuesday morning.

Darling said the decision to part ways with the city was a difficult one, though he did not provide any specific information about what led him to it.

“But I had to make a decision at some point,” he said Tuesday in a video he released on Twitter. “And after 43 years, you know, sometimes it’s time to move on.”

Darling has served McAllen in various capacities, including as city attorney, assistant city manager, commissioner and most recently as a two-term mayor.

“And it’s been a labor of love. I really enjoyed every minute of serving the city,” Darling said. “I believe in public service. I think it’s one of the best jobs you can have.”

The mayor said he had certain projects in mind when he first took the reins of the city eight years ago, and most of them have been carried out.

“So it’s been a pretty successful term,” he said.

Darling said he was especially proud of the creation of the University of Texas Rio Grande Valley School of Medicine and the establishment of its administrative headquarters in south McAllen.

He also noted the merger of the Rio Grande Valley’s three metropolitan planning organizations, the construction of the McAllen Performing Arts Center, the expansion of La Plaza Mall, and the development of the Tres Lagos Masterplan Community, along with the establishment of the new Texas A&M campus there.

“I wholly realize that I did not do these things by myself,” he said, giving credit to those within the city and outside of it. “We have had great city management leadership, city supervisors, and employee initiative and participation.”

Darling also said he was proud of the effort to establish the Respite Center in partnership with Catholic Charities as a response to the immigration asylum crisis the city faced, as well as providing humanitarian care and addressing the nationwide publicity.

He thanked his family and his supporters who he said continue to encourage him to run for office, and said he hopes to serve the community in other capacities.

“I hope to provide some service to the city on a board or two — if I’m wanted,” he said.

Darling also said he’ll miss all of the city functions and other events that a mayor “gets to attend.”

“You’ll notice I didn’t write ‘has to’ (attend) cause I’ve enjoyed almost every one,” he said smiling.

Darling is also responsible for creating some of the most elaborate entrances to the McAllen’s annual State of the City address, including rappelling from the roof of the convention center, dancing his way across the stage in costume and riding in on a bike, helmet, biker shorts, and all.

“I still have one left, but I have to admit that I have run out of unique ways to enter,” the mayor joked. “And all I can say is, thanks for having me as your mayor and city councilman. I hope that I did a good job and served my city well. And I’ll be around.”