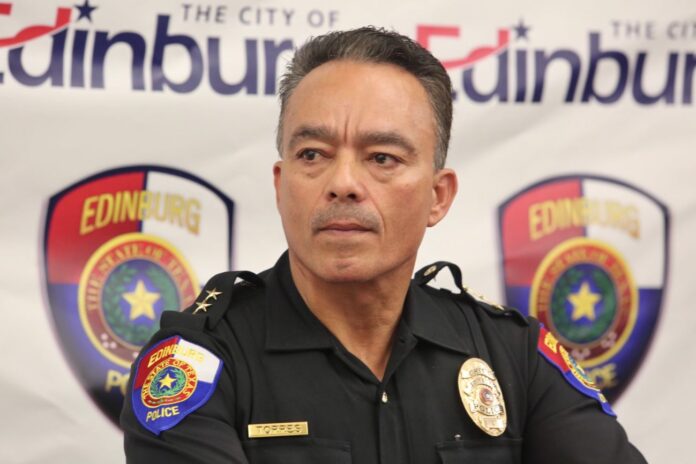 A federal judge has ordered the city of Edinburg to arbitrate a breach of contract claim levied by two officers who allege they were reassigned because of police union activity.

The dispute at the center of the lawsuit is the Meet and Confer Agreement executed between the EUPOA and the city of Edinburg in January 2018 and whether grievances brought by the officer are subject to arbitration under that agreement.

The city of Edinburg says no, arguing the agreement provides police chief Cesar Torres the right to reassign employees as he sees fit while the EUPOA argues an article in that agreement prohibits discrimination against employees for union activity.

The EUPOA further argues that the reassingment of two officers from the Criminal Investigations Division, or CID, to patrol was for their opposition to Torres’ request to reopen the Meet and Confer Agreement to allow for lateral hires at the department.

“When a new chief of police, Chief Cesar Torres, began to pursue changes in the police department in 2019, the parties’ relationship soured,” the order states. “Plaintiff alleges that Chief Torres made personnel decisions, such as suspending certain police officers or assigning them to undesirable shifts, based on their opposition to Chief Torres’s personnel decisions or because of the police officers’ membership with Plaintiff Association, which voted against Chief Torres’s move to reopen the Meet and Confer Agreement to make certain lateral hires.”

Days later, Salazar and Ysquierdo filed grievances alleging their reassignment was illegal and done to chill their freedom of association guaranteed by the First Amendment, according to the ruling.

The EUPOA alleges Torres failed to respond to the grievances as required by the Meet and Confer Agreement.

On April 9, the EUPOA sued the city and the litigation eventually made it to federal court where the EUPOA sought to compel the city to arbitrate the grievances.

The city, however, has argued that the grievances are outside the scope of arbitration, but EUPOA alleges it is subject to arbitration because they say Torres violated a section of the Meet and Confer Agreement that bans the city from discriminating against officers for union activity, according to the lawsuit and motions filed in the case.

“Plaintiff’s allegation is supported by other allegations that Chief Torres ‘explicitly stat[ed] that he did not care that the changes [he would be making to the police department] would result in lawsuits because he was not going to be around long enough to see them reach their conclusions,’ that Chief Torres reassigned Association treasurer Eric Salazar to graveyard patrol shift from his favorable position with the Criminal Investigation Division (causing him to lose the better pay) only two days after officer Salazar’s election to a board position of the Association, and that Chief Torres previously indefinitely suspended the Association president and treasurer without pay and subsequently reinstated them ‘without any discipline being imposed for the conduct made the basis of the administrative suspension and the indefinite suspension,'” Alvarez wrote in the order.

The judge notes, though, that the Meet and Confer Agreement has limitations, including that the city holds the right to hire, demote, suspend, discharge, restore, lay off, promote, assign or transfer employees any time, anywhere, which the city argued is why Torres’ reassignments were within the scope of the agreement and not subject to arbitration.

Alvarez, however, sided with the EUPOA on one allegation, a breach of contract claim, which centers on the officers’ reassignment allegations.

The judge ordered both sides to complete arbitration by Oct. 2, records show.