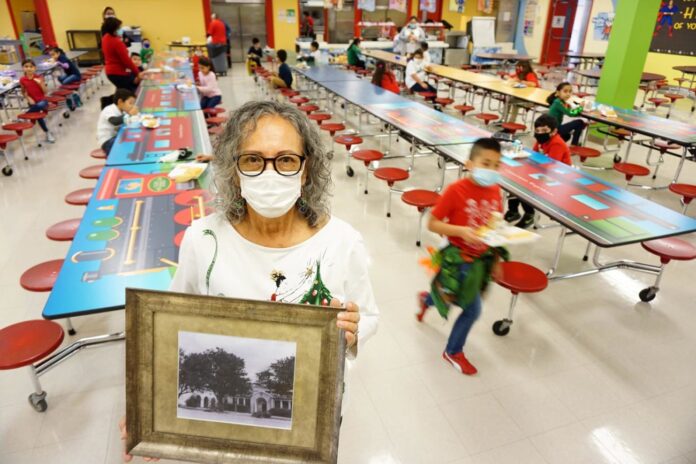 Janie Cortez still remembers being a first-grader at Olmito Elementary School nearly 70 years ago. Now she’s retiring as the school’s longtime secretary, completing a 50-year run at what is now Villareal Elementary. December 18 was her last day.

She has served as everything from a receptionist and secretary to registrar, records clerk, bookkeeper, nurse’s aide, printing clerk, cafeteria helper, textbook custodian helper and PE aide. She has worked for the nine principals who have led the school since its 1970 consolidation with the Los Fresnos Consolidated Independent School District. It goes without saying that she will be hard to replace.

“She’s a model employee and definitely a people person. She’s been here so long that parents and grandparents have had kids go through this school. They know her and they always greet her with a smile. She literally lives right around the corner. She’s a pillar here at Villareal and in the community,” Principal Pablo Leal said.

Cortez started at Olmito Elementary in 1953. At that time it was a county school where students in first through eighth grades were taught. After eighth grade her family moved to Brownsville, where she attended Stell Junior High, and she was a member of the last graduating class at Brownsville High School in 1966. The following year she got married to Federico Cortez Jr.

She stayed home for three years as the young couple started their family, but in 1970 she interviewed for a job as secretary at her old elementary school. The principal was her old eighth-grade teacher Alfredo Villarreal, after whom the school was later named.

“To me it has been a blessing, my home away from home,” she said. “I’ve learned from each and every one of the principals, and it has made me love my job, but most of all I love interacting with the children. I’ve gotten to be sort of like a counselor. I got to know their parents.”

Cortez said one of the best parts of her day has been monitoring the lunch hour. There she gets to hear the children say things like “Miss Janie I love you,” to which she replies, “You’re very much loved, too.”

“It’s a joy to see their little smiling faces, and watching them grow up makes me feel good. Some of them still remember you and come by to say Hi,” she said.

Cortez’s four children went through Villareal Elementary, as did four of her nine grandchildren.

She said she has so many memories that they all run together, but that a big one is when the school was consolidated into Los Fresnos CISD.

“I’ve watched the school grow into what it is now,” she said, also recalling the advent of standardized testing and seeing how parents now are so involved. When she started there was one class per grade level. Now there are three.

“The teachers are really awesome,” she added. “Now they’re more detailed in their teaching. It takes a special kind of person to be a teacher.”

Regarding the pandemic she said it has been really sad to see the halls so empty and so quiet.

In retirement she hopes to be able to visit nursing homes to brighten the lives of residents who are often lonely. She also plans to devote more time to her garden, and get used to being around her husband 24-7 now that he, too, is retired. They also plan to visit their daughter in Colorado.

And she plans to do some volunteering — at Villareal, of course.

Texans to vote on 8 constitutional amendments