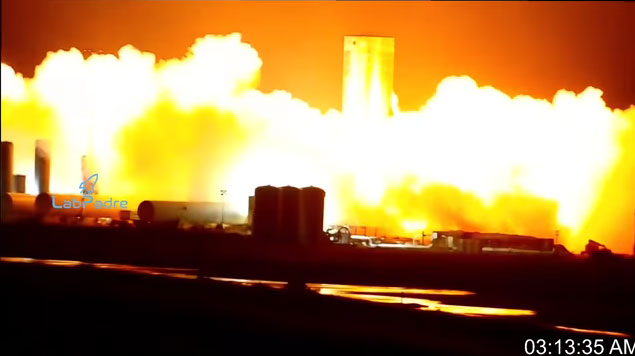 At 3:14 a.m. Tuesday SpaceX conducted a successful static-fire test of the three engines mounted in its SN8 Starship prototype at the company’s Boca Chica launch area.

It was the first time SpaceX has fired more than one of its liquid oxygen- and liquid methane-powered Raptor simultaneously. The test puts the company a step closer to launching the stainless-steel-clad SN8, which is set to receive a nose cone and perhaps another static-fire test before its first flight, possibly this month or early November.

SpaceX founder and CEO Elon Musk tweeted on Sept. 12 that testing of SN8 would include “static fire, checkouts, static fire, fly to 60,000 (feet and back), but then on Sept. 26 tweeted that the prototype’s first launch would be to 15 kilometers or about 50,000 feet.

If it comes to pass it will be by far the highest a Starship prototype has flown. SpaceX’s rudimentary Starhopper prototype flew to 500 feet in August 2019, followed by 500-foot “hops” of the Starship SN5 prototype on Aug. 4 and the SN6 prototype on Sept 3. of this year. Each of those vehicles was powered by a single Raptor engine. “SN” stands for “serial number.”

“One way or another, excitement guaranteed!” he tweeted on Sept. 12 regarding the planned SN8 flight.

Musk alluded to technical challenges with the “body flaps” meant to control the vehicle’s attitude upon descent to a controlled landing.

“A very tough problem is sealing the moving flap to body joint without melting or shredding the seal,” he tweeted on Oct. 9.

Musk tweeted on Oct. 2 that he plans to deliver an update on Starship progress this month, including a peak at the first orbital version.

“The design has coalesced,” he tweeted. “What is presented will actually be what flies to orbit as V1.0 with almost no changes.”

SpaceX is developing the Starship-Super Heavy booster vehicle to carry humans to Earth destinations and eventually the Moon and Mars, with the ultimate goal of making the species multiplanetary in order to ensure its survival.

On Tuesday Cameron County Judge Eddie Trevino Jr. ordered the closure of S.H. 4 near SpaceX today from 7 a.m. to noon and from 3 p.m. to 5 p.m., though Boca Chica Beach will remain open.

“SpaceX and law enforcement authorities will be coordinating to ensure that no individuals or vehicles are allowed access to these areas during these times of day,” he said in a statement. “Individuals who provide proof of residence will be allowed to proceed to their homes during testing. In case of an emergency, the necessary medical and/or law enforcement personnel will be allowed to circumvent the road closure.”

The Federal Aviation Administration on May 28 granted SpaceX a two-year license for suborbital Starship testing at Boca Chica.