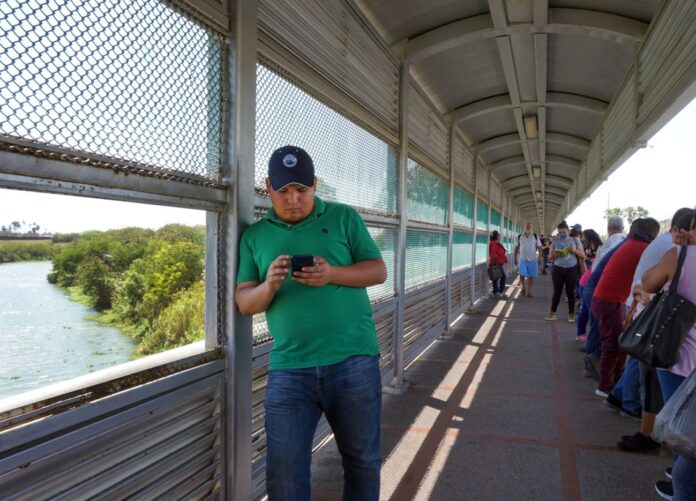 The temporary restriction on non-essential travel at U.S. ports of entry imposed by the Trump administration is exacerbating the negative economic impact from the coronavirus pandemic, according to Cameron County Judge Eddie Treviño Jr.

Speaking at a June 10 press conference, he said the restriction prevents any Mexican citizen with a Border Crossing Card from entering Brownsville or anywhere else along the U.S.-Mexico border to shop, visit relatives and such. Small-business owners on this side of the border are feeling the hurt and the county’s bridge revenues are taking a huge hit, Treviño said.

The restriction for land ports of entry, which doesn’t affect U.S. citizens crossing the border, is set to remain in place until June 22, though Treviño said he’s learned that the Department of Homeland Security is considering extending the restriction for another month or even longer.

“As the state of Texas and the rest of the country opens up its economy, those of who live on the border continue to be impacted severely as a result of not allowing people to cross for economic trade,” he said. “Sales tax is being impacted, obviously tourism, and everything else that we would normally rely on during this time of year. So we’re asking that DHS please not extend it.”

Treviño said Mexican nationals on non-essential business should be allowed to cross even if some potentially could carry the carry the novel coronavirus, the virus that causes COVID-19, noting that the disease is already here.

“If we allow people coming over from Mexico is it possible they’ll have it? Yes, it’s possible. But we’ve already seen a spike in cases,” he said. “Is this going to be the norm? In other words, is this the price of doing business? Opening up our economy, are we going to have to accept the fact that there are going to be positive cases? … If the rest of the state and the rest of the country is reopening, why should the border be singled out for that reason?”

Treviño, who serves as chairman of the Texas Border Coalition, in that capacity and on behalf of the county sent two letters to DHS acting secretary Chad Wolf asking that the agency reconsider further extending the port-of-entry restriction. Joining Treviño in requesting that the restriction be eliminated was IBC Bank Chairman/CEO Dennis Nixon, Borderplex Alliance CEO Jon Barela and Laredo Mayor Pete Saenz, who said the policy has been devastating to small and medium-sized businesses along the border, including retail, medical and tourism businesses.

“Visitors from Mexico are essential to all of the businesses along the border,” Nixon said. “Without these customers, patients and clients, many of these enterprises will fail. Municipal and county budgets that rely heavily on crossing tolls and sales tax are being significantly affected.”

If DHS does extend the restriction, the federal government needs to reconsider limiting how local governments can spend relief funds, whether through the CARES Act or future legislation. As it stands, money made available to local governments can only be used for coronavirus-related expenditures as opposed to general revenue shortfalls caused by the pandemic. The $3 trillion HEROES Act passed by House Democrats last month does away with those limitations, though Senate Republicans have so far been largely hostile to the idea of passing additional relief legislation, even as the pandemic continues to exact a steep economic toll.

This means that Cameron County, with an estimated population of approximately 425,000, received far less per resident than Hidalgo County, with a population near 869,000. Treviño said he’s never gotten an explanation from Gov. Greg Abbott regarding the funding disparity, and doesn’t expect to.

“I think it’s a shame and it’s disappointing,” Treviño said. “We know that the number of cases in Cameron County for the most part have exceeded those of Hidalgo County, which is approximately double our population. We’ve also expended a lot more of our resources dealing with COVID-19. … We accept that, but to not receive the funding necessary in order to reimburse us and also address many of the other economic issues, both for ourselves at the county level and our local businesses, is extremely disappointing and disheartening.”