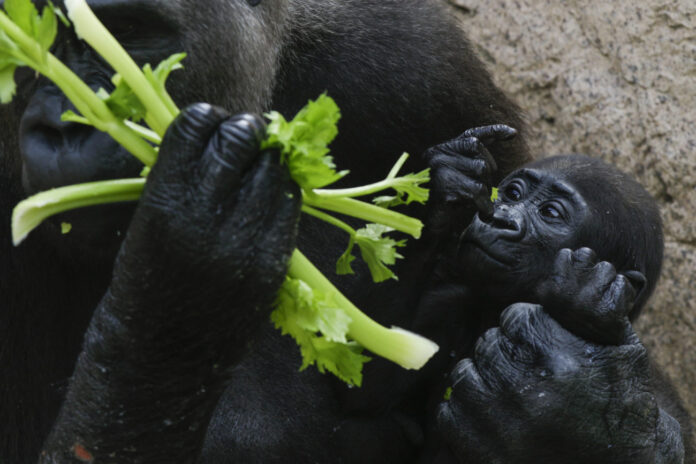 The Gladys Porter Zoo invites the community to be part of the birthday celebration for gorillas Margaret and Mbundi’s first baby, Burchfield, which will be live-streamed at 2 p.m. Thursday on the Zoo’s Facebook page.

Burchfield turned 1 year old on Tuesday and celebrated with ice treats but the zoo saw the need to make a bigger celebration, which even includes a piñata, to have the community involved in such an important moment for the gorilla family, even if it’s just online. The live-stream will consist of the family of gorillas playing with the presents, receiving treats and interacting with each other.

“We are doing the live stream so we can share with the whole community because it was so much fun [Tuesday]. It’s been great just watching the two babies, who are only a month apart, and watching them grow up together, get more adventurous and it’s just been so much fun and they have been so well-received by the community,” Mark Echevarria, associate Curator of Gorillas and Carnivores, said.

“We really wanted to do this because the community has adopted all the animals here, especially the gorillas, and we know in these times people are disappointed that they can’t be here and see them.”

The zoo has four generations of Western lowland gorillas, the most numerous of the gorilla subspecies, and are mammals that can be found in the rainforest of Sub-Saharan Africa. Echevarria said in a video for the zoo that they are critically endangered due to disease and poaching and that gorillas are the largest primates in the world although the lowland gorillas is the smallest of the subspecies.

Echeverria said it is awesome to have four generations of gorillas at the zoo because it represents the family-oriented community in Brownsville. He said numerous times when members of the community see him at the grocery store with the zoo uniform on, they ask him if the zoo is open already because they miss the animals.

The zoo recently set up a GoFundMe page to support the Zoo’s Emergency Fund to continue to feed and take care of the animals during this pandemic. To donate, visit https://charity.gofundme.com/o/en/campaign/gpz-emergency-fund.