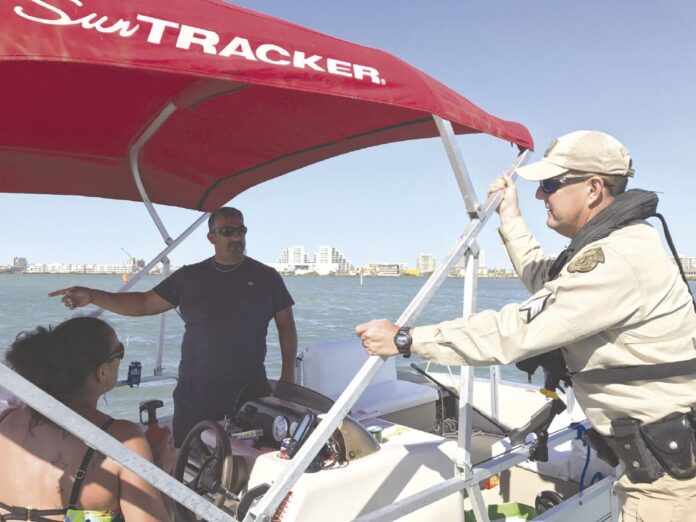 A Polk County Game Warden responded to a boat fire on Lake Livingston. Upon arriving, the warden observed five individuals swimming in the water near a boat engulfed in flames. A young boy swimming from the flames stated he was tired and could not swim well. The warden removed his gun belt, swam toward the boy, and pulled him to safety. He noticed another individual struggling to swim and assisted him safely back to shore. The boat fire was extinguished by Onalaska Volunteer Fire Department. All occupants of the vessel were safe and uninjured.

Orange County Game Wardens received a call from the Orange County Sheriff’s Office Dispatch reporting several deputies were attending to an alligator near Bridge City. A game warden responded to the popular fishing spot and discovered three teenagers had caught a 7-foot alligator. The youths had also enlisted the help of another person to kill it.  The three teenagers were cited for taking the alligator in closed season. The alligator was turned over to a nuisance control hunter. Cases are pending.

The Other White Meat

The Texas Game Warden Criminal Investigation Division provided Bexar County Game Wardens with information regarding an individual selling deer meat on Craigslist. The game wardens responded to a residence in Southern Bexar County where the suspect admitted to attempting to sell the deer meat and gave information where the white-tailed deer had been killed. The individual was cited for selling white-tailed deer meat.

Wise and Jack County Game Wardens observed a male subject who appeared to have passed out on a pontoon boat. His legs were hanging from the passenger compartment near the engine while the vessel was underway. The wardens stopped the boat and determined the subject was underage and highly intoxicated. Other minors on the boat also admitted to consuming alcohol. An adult on the boat confessed to one of the wardens that he provided the alcohol knowing underage occupants were consuming it. One subject was placed under arrest for public intoxication and another arrested for the purchasing/furnishing alcohol to a minor. Citations for minors in consumption of alcohol were issued to the occupants who had a detectable amount of alcohol in their system.

Bell County Game Wardens were contacted by a local landowner’s agent who was on the property hunting hogs when he came across a male individual digging for arrowheads without the landowner’s permission. Wardens arrived on the scene and discovered an eight-foot hole the suspect had dug and several artifacts. The wardens arrested the digger. The suspect had a lengthy criminal history and had recently been released from the penitentiary. He was charged with antiquities code violations, criminal trespass, and criminal mischief. Cases are pending.

A Travis County Game Warden issued multiple citations to an individual operating an illegal party boat. In an attempt to skirt party boat regulations and avoid trespassing charges, the captain of the vessel coached the attendees of a bachelorette party to announce themselves to the marina as “friends”. Consequentially, the party boat was denied access to the marina. However, the marina was kind enough to provide a legal captain and lease the party another vessel to finish their celebration.

Deep in the Weeds

Jackson County Game Wardens were patrolling the coastal area of Jackson County for fisheries enforcement. They observed two individuals sitting in a truck at a local boat ramp of Carancahua Bay. There were kayaks in the bed of the truck and fish in a trash bag. The individual on the driver’s side appeared nervous during conversation. One of the wardens asked the subject numerous times if there was anything illegal in the vehicle. The male subject changed the topic each time. Eventually, he stated that there was a little bit of weed in the vehicle. After conducting a search of the vehicle numerous drugs were discovered and seized including: 17 grams of methamphetamine, a THC vape pen, and thirty pills of hydrocodone and amphetamine. The male subject was arrested on four narcotics charges and a parole warrant.