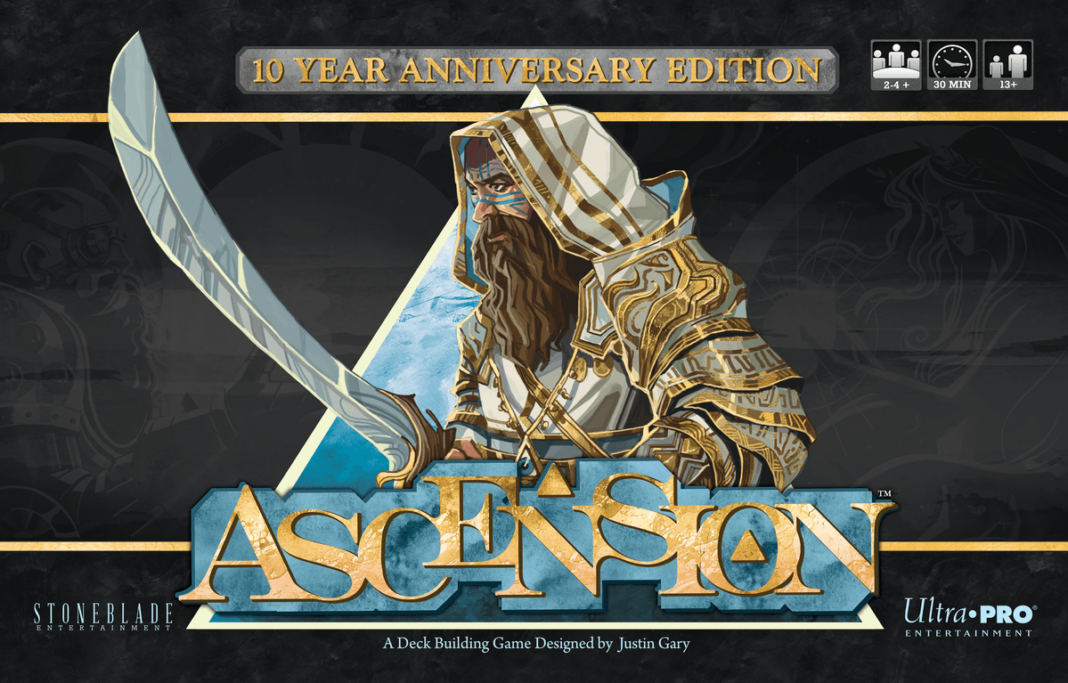 I didn’t know it at the time, but I first played Ascension right around the time it was released.

I was on a visit to a friend’s house and he had this new card game, something in a genre I’d never heard of: deck building.

A deck building game starts all players off with an identical deck of basic cards. Each of these basic cards has some sort of resource used to either purchase or defeat cards in a group of cards shared by all players.

In Ascension, the goal is to purchase and defeat cards in a center row in order to acquire the most points, called Honor, and win the game.

As one might expect, it isn’t quite so simple. The real beauty of Ascension comes with the interaction of certain cards and building your deck in a way that these cards play off each other.

For instance, at the beginning of each of your turns, you get to draw five cards. In the early game, these will be a combination of runes and attack power. Runes let you recruit hero or construct cards. The attack power will let you defeat enemies in the center row which will then provide you immediately with some Honor points and, sometimes, another special effect.

Once your turn ends, you discard your entire hand and draw five new cards, and any cards you purchased with runes go into your discard pile.

When you can no longer draw cards, you shuffle your discard pile and draw more. In this way, the cards you have purchased on previous turns then make their way into your hand and you can start making use of their abilities.

Some cards, for instance, are simple, providing runes or attack power in larger quantities than your starting cards. Others will interact with each other. Certain heroes will allow you to draw additional cards if you play heroes related to their faction, of which there are several. While you only initially draw five cards, using the various abilities from other heroes gives you a chance to draw many cards and purchase more and more from the center row.

Since this is the 10th anniversary edition of the game, it should be pretty apparent it has been around for a while. There are numerous expansions to Ascension, but this edition contains the original game, in an updated and very, very pretty form.

That being said, if you’ve already got a copy of the original Ascension game, it may not be worth the purchase, but for anyone who has yet to give it a try, this is a must-add game for any collection. It supports from two to four or more players and will never play exactly the same way each time.

The Ascension: 10-Year Anniversary Edition was originally offered as part of the Kickstarter campaign for the Ascension Tactics deckbuilding miniatures game, which sounds phenomenal.

It appears it will retail for around $40 once it releases.

Advice: Education should be a household priority

Advice: The art of living a good life