Michael Anthony Steele used to suffer from tachycardia, meaning at random times, his heart rate would spike to a speed at least twice faster than normal — and his greatest fear was that it would happen in the middle of presenting to kids.

Steele, who grew up in Brownsville, writes children’s books for a living and travels to elementary schools across the country to talk to young students about his job. One day in October 2018 while he was presenting at Santos Livas Elementary in Alamo, Steele’s worst fear nearly came true.

He felt the lightheadedness that usually comes with attacks, but he convinced himself it was just an anxiety attack. After his first presentation of the day, Steele went to visit Jessica Ramos, the school’s nurse.

He told her he just needed to lay down and relax, but Ramos knew it was more than an anxiety attack. She dialed 9-1-1 and while on the phone with an operator, Steele passed out.

He didn’t have a pulse, so Ramos began to perform CPR. She called in the district’s emergency response team who had to use paddles to electrically shock Steele’s heart to get it beating again.

His heart stopped twice, and the team saved him both times.

“There really is no way I could ever truly repay Ramos and everyone else who saved me that day,” Steele said. “They saved my life, and I am here because of them.”

As a token of his gratitude, Steele showed his appreciation for Ramos in the way he knows best: writing about her. 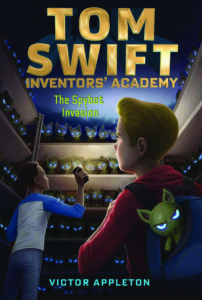 In his latest book for the series “Tom Swift Inventors’ Academy: The Spybot Invasion” Steele includes a nurse in the storyline under Ramos’ name. The book came out in July 2020.

The book follows the adventures of Tim Swift who has a passion for inventing machines, and Jessica teaches him how to make sure his creations are safe for people. This motivates Tim to invent tools that save lives.

Ramos graduated from South Texas College’s nursing program in 2004 as a registered nurse, and after working at Edinburg Regiona’s emergency room as a charge nurse for six years, she joined Pharr-San Juan-Alamo ISD as a school nurse in 2013.

She said saving Ramos that day brought her back to the emergency room.

“I had a job to do and I did it, and it feels great,” she said. “But that’s not really important. What’s important is that Anthony is still around to keep teaching children what is right and wrong. He does a phenomenal job of teaching our young kids through his books, and changing children’s lives that way, he’s touched more people than I have.”

Ramos and Steele have stayed in touch ever since, and she keeps a small library in her office of his books.

“I really think all kids should read his books,” Ramos said. “Anthony is quite the author and teaches great messages in his books. He’s doing something great for our kids. This guy is on a mission and I am just glad that I was put in a place to help him with that.”