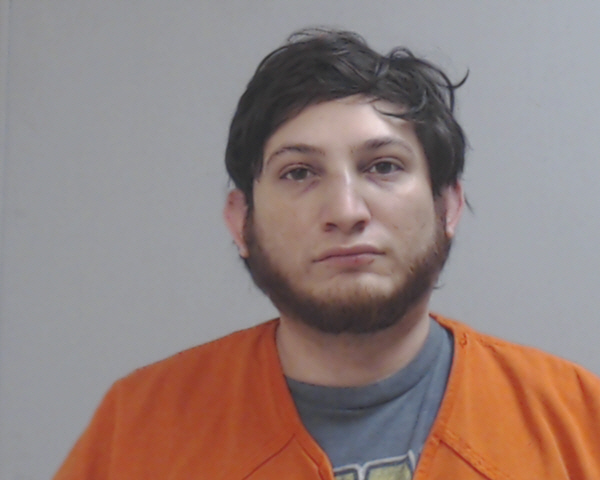 McAllen police responded to the Evergreen Apartments at 2501 W. Nolana at about 1:52 a.m. for a report of a single gunshot heard at the apartment complex.

While enroute, dispatch advised the officer that two men were fighting in the parking lot.

Upon arrival, one of the officer’s colleagues had one of the men, 30-year-old McAllen resident Timothy Justin Cantu, detained while the other man, Cantu’s cousin, was on his knees.

The officer detained Cantu’s cousin to question him and noticed there was a good amount of fresh blood near the man.

“(The man) stated that Timothy was his cousin and had gotten into a physical fight due to Timothy shooting a shotgun once near him and shortly after striking him with a samurai sword on his left upper arm,” a probable cause affidavit states.

The man told police the violent incident started over text messages that evening due to Cantu letting him borrow a .22 caliber rifle and demanding it back, police say.

According to the affidavit, the man told Cantu it was late and that he would return the firearm the next day, which he says caused Cantu to start disrespecting him over text messages.

So the man drove over to Cantu’s apartment to try and calm him down, police say.

Upon arrival, the man said he texted Cantu to tell him he was outside.

“(The man) stated that Timothy then step (sic) onto the second store (sic) patio while brandishing a black in color pump action shotgun. (The man) informed me that he shouted at Timothy telling him to put the weapon down at which point Timothy pointed the shotgun at him,” the affidavit states.

The man told police he looked away, closed his eyes and heard a single shot. When he reopened his eyes to see if he had been shot, he realized he was OK, police say.

Again, the man said he shouted at Cantu telling him to put the shotgun down and this time told told him to come downstairs so they could handle it like men, according to the affidavit.

McAllen police say Cantu then struck his cousin on the left arm with the samurai sword.

As this was happening, Cantu’s girlfriend was yelling at him to come back inside, which distracted Cantu, giving his cousin an opportunity to lunge at him and take the sword, police say.

“(The man) told me that once he had lunged at Timothy they both began to fight for the sword causing both of them to cut each other with the sword on their right hands. (The man) stated that he was able to take Timothy to the ground where he disarmed him,” the affidavit states.

Police say Cantu’s girlfriend then picked up the samurai sword and took it back inside.

“(The man) advised me he then had punched Timothy 4 to 5 times with a closed fist because Timothy threatened to kill him if he got back up. (The man) stated that he held Timothy down until we arrived,” the affidavit states.

Cantu is charged with aggravated assault with a deadly weapon and discharging a firearm in a municipality.