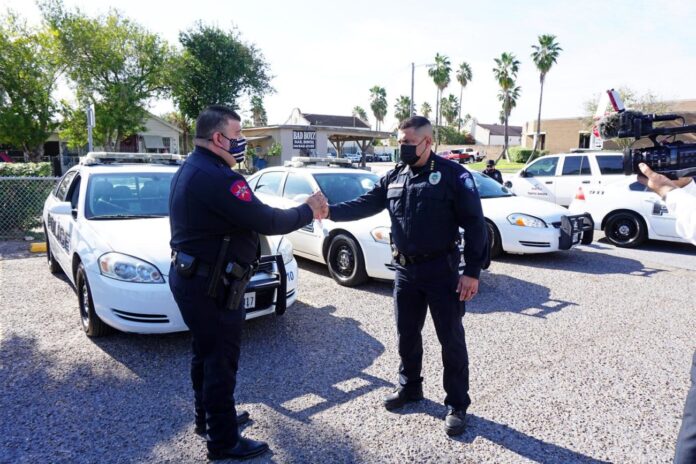 The City of Progreso took delivery Monday afternoon on four fully equipped police patrol cars from the Brownsville Police Department, a gift that will nearly double the number of patrol cars available for service in the Mid-Valley city of 6,000 people.

The transfer took place across the street from BPD administrative headquarters at Seventh and Jackson streets. Progreso planned to put the patrol cars back into service before the start of the new year, Progreso Police Chief Cesar Solis said.

Solis and Brownsville Police Chief Felix Sauceda said the exchange developed after they met at a leadership training event in upstate Texas in mid-November.

“One thing led to another and here we are,” Solis said.

Sauceda said the cars are fully titled, fully functioning and come with the standard safety and emergency hardware. “We’re proud to be able to do what we’re doing today,” he said.

Progreso has a fleet of five patrol cars, so adding four more will almost double its size. Brownsville’s fleet of patrol cars numbers 156.

Sauceda said he found out about Progreso’s needs during the leadership conference, asked for an inventory, and found out that the four cars were due to go out of service and available to be donated. The mayor and city commission approved the transfer in early December.

Progreso and Brownsville officials said the four cars would cost in the neighborhood of $45,000 to $50,000 each to purchase new. The vehicles have reached about the halfway point in their service life expectancy. “We know they’re well maintained,” Solis said.

“Brownsville was able to donate something essential to the Progreso Police Department and the city and people of Progreso,” Sauceda said.

Solis said his department serves an area of approximately 3.5 square miles that is south of Weslaco on FM 1015 and north of the Mexican city of Nuevo Progreso, formerly known as Las Flores. The area is stable but with some population growth, he said.