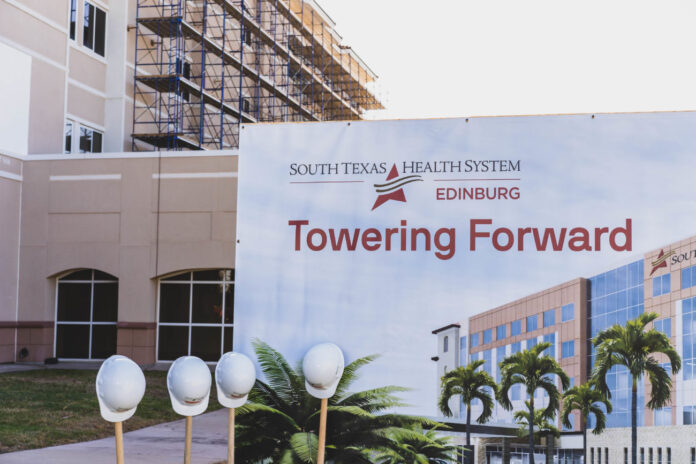 EDINBURG — South Texas Health System Edinburg broke ground on a $100 million hospital tower that will not only expand its bed capacity, but also include a new emergency room.

The expansion project at what was formerly known as Edinburg Regional Medical Center will add 59 adult beds to the hospital, bringing the total adult bed count to 202, hospital officials said Thursday. Of the 59 new beds, 16 will be dedicated to a new Intensive Care Unit and 28 will be part of an inpatient physical rehabilitation program that will include a new rehab gym.

The five-story tower will also include shell space for another 55 adult beds. Once those rooms are built out, they will bring the tower’s total bed count to 114, and the hospital’s total to 257.

Edinburg Mayor Richard Molina and state Rep. Terry Canales spoke candidly about their experiences with the Edinburg hospital, where Molina said he’s taken his father and Canales said he went when he thought he was having a heart attack.

“I was at a ceremony at Bobcats Stadium when they were dedicating it to Coach (Robert) Vela, and I left that parking lot, and I was with my wife, and I said, ‘Take me to the hospital. I’m having a heart attack. I think I’m dying,” Canales recalled during the groundbreaking ceremony Thursday.

“And she says, ‘Which hospital?’ And I said, ‘The one that’s right there!’” Canales continued, evoking laughter from the crowd. “And that’s what’s really important: that this is right there for us. This is our hospital.”

Accessibility to quality health care determines the quality of our lives, the Edinburg lawmaker continued.

“The reality is that in the Rio Grande Valley our healthcare infrastructure is at a deficit,” Canales said. “And so this is not just needed, it’s absolutely imperative that it happens.”

“When you look at the way the tower will be built, it will start with the front of our existing tower and move outward toward Trenton. And at the very front of the tower, we will be placing an expanded and newly redesigned emergency department,” Lance said, noting it will feature 16 treatment bays, including two trauma rooms. “It’s going to be a wonderful addition to our community.”

“This new patient tower at South Texas Health System Edinburg is an important reflection of the region’s development and our commitment to the community,” Stark said.