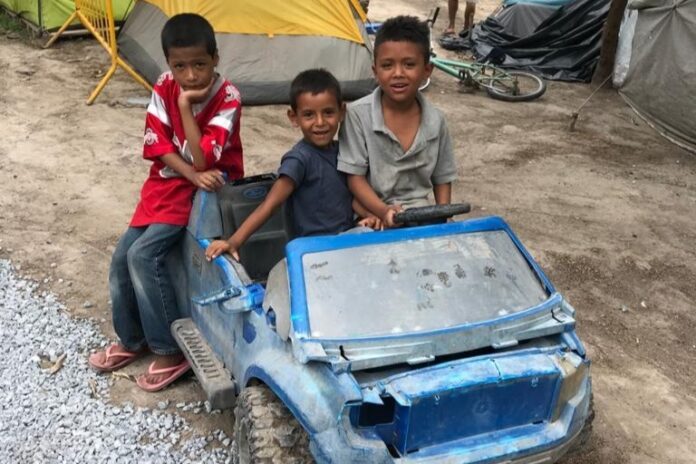 Volunteers at the migrant camp at the Gateway International Bridge are partnering with Team Brownsville and the Resource Center of Matamoros to raise funds to buy and build a playground for the hundreds of asylum-seeking children who are living there.

The GoFundMe, which was created on Nov. 12 by volunteers Erin Hughes and Carlo Deldonno, has raised over $5,000 as of press time. According to the page, some of the children have been living in tents for over a year with no access to real toys or playground equipment.

“The playground is critical for child development, they need to have a safe place where they can act as kids and learn to play and interact with their peers. Providing a place for these kids and their families to make happy memories is important for their quality of life,” Deldonno said.

“I have had great experiences playing and interacting with the kids in the camp. I gave a Lego set to a friend’s son who lives in the camp and he was overjoyed at the opportunity to build and play with the new toy. His father appreciated the gift because he knows how important it is for children to be able to play.”

Deldonno is a Boston resident who volunteers at the camp a few times a year with Global Response Management. He said the idea to build a playground started after Escuelita de la Banqueta opened inside the camp to educate the children.

“We were excited that the higher needs of these kids were starting to be met and thought that a playground for them was the next step in improving their quality of life,” he said.

“These families are good hard working people who are seeking a better and safer life for their families. These children will play a part in the future of the world and become a generation of resilient people who are the reflections of their upbringing and childhood memories.”

Hughes, an engineer who moved from Philadelphia to Brownsville to volunteer at the camp, said she has worked on different projects with Team Brownsville, Resource Center of Matamoros, Global Response Management and Dignity Village but most of her time is spent working with a team of engineers that is starting to formalize under a new organization called Solidarity Engineering, which is made up of three women engineers.

“We spearheaded the stormwater management project at the camp; bringing in tons of gravel to make the camp more accessible and less muddy, building platforms to raise tents and keep them from being flooded out, filling and distributing sandbags, buying tools and digging drainage channels,” she said.

“I did a hurricane assessment to determine how high the river would rise to overflow the banks and flood out the camp. I helped source the materials to construct the school, my team designed and fixed the showers, we designed and installed a water distribution system and now we are working on the playground.”

Hughes said the goal is to raise about $17,000 in total to spend on preparing the ground and foundation, building a wooden curb, installing a soft sand surface and purchase the playground from a manufacturer.

“There are hundreds of kids at the camp who have very little resources, there is no designated place for them to play or socialize. I see them playing tag among the tents or trying to ride bikes on the gravel and through the mud. Having a place to express themselves, a place where they can let their imaginations run wild, a place for exercising and socializing, this is so important for childhood development. A playground will let them know that we haven’t forgotten about them. It will let them know that they are important.”