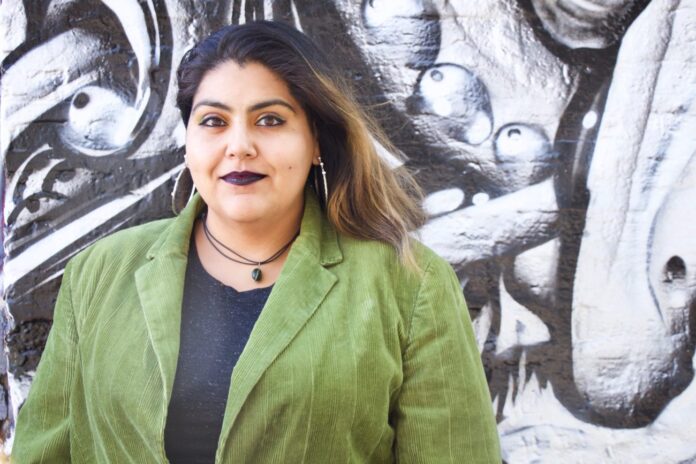 Gliding her small hands over the faux yellow brick wall, Denise Serna knew as a first grader that she had a heart for theater.

More than two decades ago when Serna was 6 years old, her elementary school visited Pharr-San Juan-Alamo High School to watch its production of “The Wizard of Oz,” and she was stunned.

After the play, her class met with the actors and walked through the set, and young Serna could not believe that the yellow brick wall was painted — it shook her world.

Now 31, the San Juan native still views theater as magic. As a theater director in Chicago, Serna has become an expert at designing sets and composing scripts. For her, theater is the magic that breaks language barriers and brings people together.

Closing the gaps of minority representation in theater productions has been one of Serna’s priorities as a director. She’s lived in Chicago for five years now, producing more than a dozen plays so far.

The latest play Serna has directed is “45 Plays for America’s First Ladies,” which highlights the lives of the women who have served as the country’s first ladies, from Martha Washington to Melania Trump.

However, because of the COVID-19 pandemic, the play never performed to a live audience. Instead, a video was made and released last month, and Serna said the situation pushed her to “open creative doors I probably wouldn’t have used otherwise.”

In addition to overseeing the creation of sets, designs of costumes, and training of actors, Serna said for the first time, she also had to consider camera angles and draw storyboards.

Carrying through with her production of “45 Plays for America’s First Ladies” was important to her because of this year’s presidential election. With stages across the world shuttered because of the pandemic, Serna said the theater industry is currently undergoing a shift to digital entertainment.

She added because of the possible connections and accessible history technology offers, the play touches on parts of the lives of first ladies that are often left out.

“It is because we had such access to information in this time in our history, and such access to one another — to citizens around the globe — we had a really wonderful opportunity to examine our history together,” Serna said. “And time and time again, we have seen that the stories are not complete, and that the picture is not always colored all the way in.”

The play is a series of anecdotes of first ladies and their experience at the White House, and while producing the show, Serna said she learned about President Harry Truman’s wife, Bess Truman.

The 33rd president became gravely ill in 1952 near the end of his second term in office, and while he spent time recovering, it was Bess who presided over his responsibilities.

“It really struck me because of course there was a woman who was smart enough and fast enough to figure out how to save the day, and of course we did not know about it,” Serna said. “Then of course, the fact that this proves the thesis that there are things being left out in what is being taught.

“It’s really eye opening and powerful to see the ways that women navigate power when it’s not actually given to them — they have to find ways to snatch it.”

Serna sharpened her acting and directing skills in theater programs at San Juan Middle School and PSJA High, where she graduated from in 2007. She then moved to Ohio to study performance and design at a university there, and later London for her masters at East 15 Acting School.

Graduate school took Serna all around the world. In 2014, she lived with the family of a master puppeteer in Bali, a province in Indonesia. There, she learned about shadow puppetry and Balanise dances, and had the opportunity to collaborate with local puppeteers to direct a Balanise interpretation of the Hispanic fable “La Llorona” infused with dance and puppeteering.

Serna also spent some time living in Moscow, where she studied physical theater while directing productions with local artists there.

The tasks of producing plays with people who did not speak English taught Serna that communication is not limited by a shared language — and neither should theater.

“We had to collaborate and tell perspective stories together, and our ability to communicate with one another was through gestures, through music, through drawing pictures and things like that,” she said. “It’s really amazing to me all the ways that we can communicate to one another without language, and that drives me to continue to create accessible theater.

“Theater has multiple accesses, not everyone is going to be engaging with your piece through language, and it’s clear that we can engage really robustly without language. So, what are all the other different pathways people can have in storytelling, and how can we be stimulating their other senses.”

As a PSJA student, Serna was well known among her peers as a leader in the school’s theater program. She was heavily involved and talented.

The moment Serna realized she could direct plays all her life, she recalls, was when her drama teacher at San Juan Middle School, Lisa Moreno, told her: “Hey, you’re good at this, and it’s OK to be good at this. People do this as a career.”

Since then, Serna has held onto those words and has stayed in touch with her teacher.

However, the theater industry was much different from her drama class, she said. Her talent was not the only thing being considered at meetings with companies.

Serna co-founded Global Hive Laboratories, an international initiative that has brought together dozens of theater practitioners all over the world together, to learn from each other and collaborate on projects.

As a director in Chicago, Serna said she is going to work “until I have more than half of my team and half of my cast are people who look like me and people who are different from me.

“I hope my role as a director continues to open up spaces for people of color and people who are non-binary in the theater industry, especially for an old theater city like Chicago where there is a generation of great theater makers who are primarily white people, and the city doesn’t look like that.”