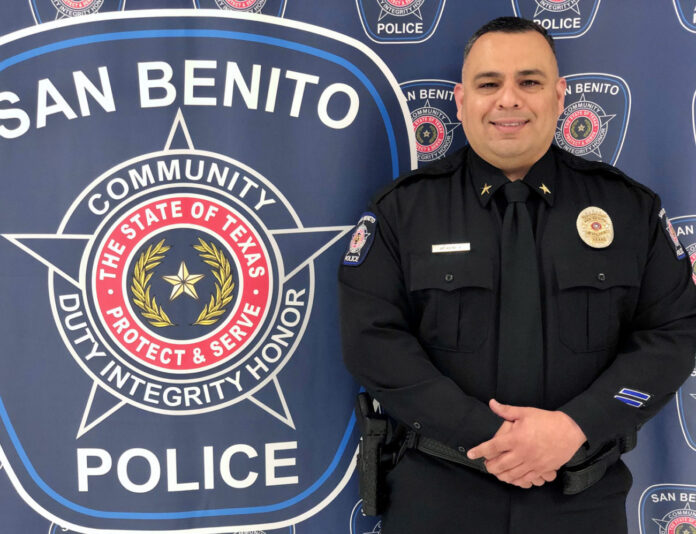 SAN BENITO — Mario Perea was named the new chief of police of the San Benito Police Department and will take over the department starting Thursday, according to a City of San Benito press release issued Tuesday.

Perea, who served as assistant chief of police since March, takes over for Interim Police Chief and Assistant City Manager Fred Bell.

Bell was appointed interim police chief March 2019 and will continue his role as assistant city manager.

“I look forward to building a positive relationship with the community and working together to keep our community safe,” Perea stated in the release. “We have a great department with great personnel, and we will continue to work hard to provide excellent service to the citizens of San Benito and its visitors.”

The City Commission approved Perea’s appointment at a special meeting Nov. 5, based on the recommendation from City Manager Manuel De La Rosa.

While serving as assistant chief, Perea oversaw the department’s operations, took a bigger role in managing the annual operating budget, assessed the equipment needs and updated policies and standard operating procedures, according to the release.

Perea started his career with San Benito police in 2005 as a patrolman. He went on to serve in the Special Investigative Unit, where he received his K-9 handler certification and also assisted in narcotics investigations.

In 2012, Perea returned to the patrol division and continued his rise up the ranks, promoted to sergeant in November of that year, lieutenant in April 2013 and captain in June 2013.

“Before his appointment, the SBPEA Executive Board met and unanimously agreed and voted that he would be a great asset to the SBPD’s future. Chief Perea’s eagerness to update and bring the department to modern policing is extremely admirable, and I see that he practices his professionalism with extreme pride whether on duty or off duty. I feel confident that Chief Perea will become a great asset to our department and our community,” Andrade stated in the release.

“Being named chief of police for the City of San Benito is a great honor,” Perea stated. “The police chief’s office comes with great responsibilities, and I would like to thank the city commission and city administration for providing me with this opportunity to lead the department.”