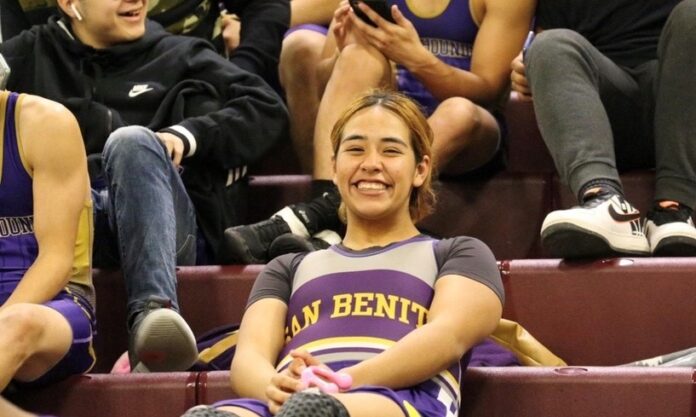 But when her cross country coach, Mark Buddle, challenged her to give it a try, the then-freshman couldn’t back down.

“(Buddle) called me out, like, ‘Why don’t you try it out? Are you too scared?’ And I said, ‘I’m not scared,’ and the next thing you know, I’m getting slammed on the mat,” Perez said with a laugh. “I honestly don’t regret trying it. It’s one of the best things that happened to me. It made me into a stronger person.”

Throughout the next four years, Perez developed into one of San Benito’s most dependable wrestlers. During her junior and senior seasons, she won consecutive District 32-6A titles and was a back-to-back regional and state qualifier. Her efforts earned her a scholarship to wrestle for Adrian College in Adrian, Mich., at the NCAA Division III level.

“I’m ready to go. I’m super excited,” Perez said. “Originally, I planned on enlisting because I don’t have the financial resources to go to college. So when it hit me that I was going to college, I was, like, ‘Wow, I’m going to do this.’ I had the grades and everything for it, but I just didn’t have the money, so when they gave me a really good offer I said yes.”

Perez still plans to be involved in the military after college, so she’ll be studying criminal justice and participating in ROTC while wrestling for the Bulldogs and coach Cliff Cushard. Even though she’ll have a full schedule, Lopez has no doubts she’ll be able to handle the jump to being a college student-athlete.

“She’s very, very strong-willed and very dedicated. Wrestling is a very demanding sport, for the physical part and also the mental part,” Lopez said. “The next level gets a little tougher because there’s more athletes involved and it’s a different brand of wrestling. But if she continues with her dedication and her discipline towards her studies and her athletic endeavors, she should be successful. I’m very proud of her.”

Lopez put a lot of responsibility on Perez’s shoulders, particularly during her senior season. Perez served as a team captain and wrestled outside of her weight class in tournaments and non-district matches to help the Lady Greyhounds earn points.

Perez took her captain role to heart and always made time to help her teammates. She said even if she was tired, she’d run extra miles with girls trying to drop weight before matches. And while her teammates were on the mat, she made sure to be close by to keep their spirits up and give them pointers.

Though she typically wrestles in the 165-pound weight class — which is where she was ranked No. 8 in the state this year — Lopez entered Perez in the 185-pound and 215-pound weight classes throughout the regular season. Once again, she rose to the challenge.

“Everybody was like, ‘Whoa,’ because that’s a big difference,” Perez said. “To move up in a weight class, it’s really hard in wrestling because it’s a whole different feel to it. The best part was I was still dominating. The fact that I was winning in whatever weight class I was in meant a lot, and it said a lot to the other schools.”

Perez left a significant mark on the Lady Greyhounds wrestling program and was grateful for all who helped her reach this latest achievement. With her mindset and dedication, she’s looking forward to doing the same for Adrian College.

“I’m a very stubborn person, always wanting more. If I don’t get something right, I’m going to work on it until I get it right,” Perez said. “When I would lose in the beginning my freshman year, I would just go run more, work out more, and I think that really paid off. I ended up being one of the best in the state for two years, so I’m pretty sure something similar is going to happen in college.

“Honestly, I owe this to Coach Buddle and to Coach Lopez. And to all my friends and family. This wouldn’t have been possible without them.”